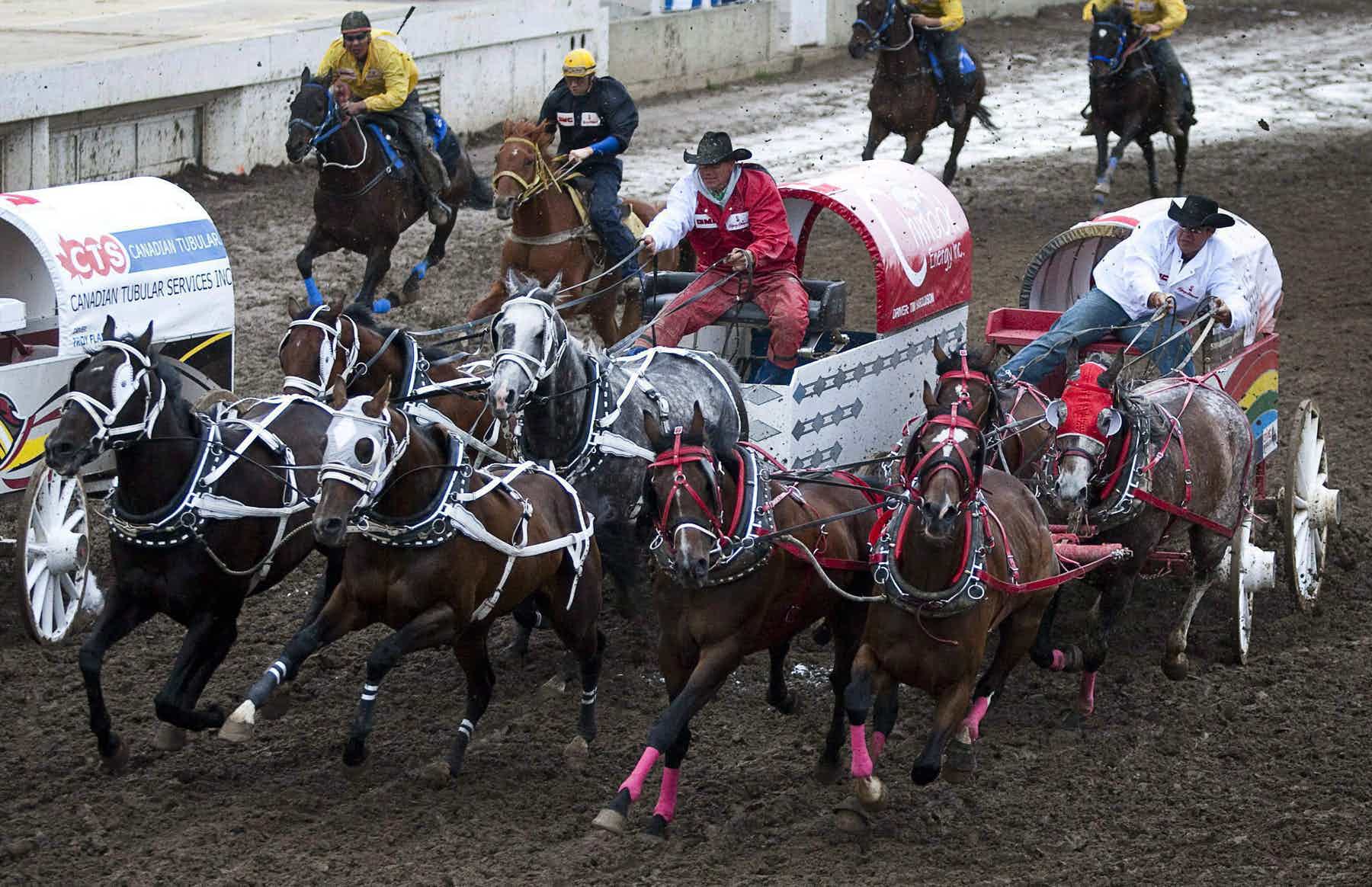 Chuckwagon racing at the Calgary Stampede on July 12, 2010. (THE CANADIAN PRESS/Jeff McIntosh)

Calgary’s 2019 Stampede is over and here is the tally: six horses dead in the chuckwagon races with a number of other horse injuries having taken place there. One of these was so publicly egregious that, to protect the races, Stampede officials felt compelled to ban a chuckwagon driver Chad Harden from the competition permanently. This pattern of tragedy, public outcry and incremental reform is as old as rodeo. But rodeo is a sport whose community is far more self-aware and resilient than many people may realize.

Why do so many Calgarians and Calgary Stampede officials support the routinely-deadly “chucks” by keeping it on the program year after year? Why won’t the Calgary Stampede’s own Animal Care Advisory Panel (formed in 2010 to manage animal treatment and serve the Stampede’s publicity goals) or the University of Calgary veterinarians engaged with the Stampede persuade event officials to phase out chuckwagon races that they know will harm horses?

Is it a blind faith that chronic accidents will somehow not occur next year? No. Everyone, including the adrenalin junkies who participate in the races, know the sport cannot be made safe since that would defeat its purpose.

A performance of conflict in western history

Rodeo sports in the form of community-sponsored competitions featuring various riding and roping events have been around in North America for about 135 years. Generally speaking, rodeos have flourished as live performances of the violence in western history, with livestock standing in for wild animals and the land, and of the struggles of settlers to take control by any means necessary.

Rodeo became a theatre of the myth. That to be truly western, one had to do difficult things that others—city people, effete easterners, squeamish tenderfoots—would not. Or chose not to. Rodeo committees thus included show-stopper events like chuckwagon racing to promote ticket sales with claims to offer the most incredible and dangerous action in the arena.

The Calgary Stampede’s loyalty to chuckwagon racing today makes further sense if we go back to one of rodeo’s most-popular timed events and original controversies: steer busting. At the turn of the 20th-century, steer busting challenged rodeo people to find a way to adapt to public complaints. Look at most rodeo histories, and you won’t find explicit descriptions of what steer busting did to steers, just that — as anthropologist Elizabeth Atwood Lawrence wrote — it was “too hard on the stock,” so was accordingly banned in many places.

To bust a steer, competitors on horseback chased down and roped around the horns a three or four-year-old steer weighing around five hundred pounds. Once lassoed, the rider would pull the rope along the one side of the steer while directing his horse to the other. The rope, anchored at the horns, would wrap behind the rear legs, tripping the steer and spinning him in the air until he landed on his head, dazing or knocking him out so that he would be more easily tied by the dismounting rider.

For steers at the tournament grounds, beyond any mental and physiological stress produced by fear, inability to graze, lack of water, overheating or physical exertion, a minority also suffered broken horns, damaged or broken limbs and occasionally a broken neck. Many died right in the arena as the crowd looked on. How many died is impossible to know, although the inevitability of it was plainly built into the regulation of the sport. An article in Chicago’s Daily Inter-Ocean from 1896 explained one rodeo’s rule: “If the steer is killed, that run and tie shall not be counted, and the party shall have chance at another steer.”

Animal advocacy organizations, members of the public and eventually stockmen (whose cowboy employees practiced on and crippled their market herd) complained to rodeos that included busting. In 1907, an official of the Wyoming Humane Society spoke for many when he told the Daily East Oregonian that he thought steer busting was “a relic of barbarism … entertainment belong[ing] to a dead period of western life.” Hence, between about 1903 and 1909, laws seeming to ban steer busting appeared across the West to calm public anger.

After that, near urban centres, SPCA or Humane Society officials dutifully appeared at some cowboy tournaments to enforce the law. In fact, reluctant as they were to cause controversy that would have them blackballed by rodeo officials, mostly they just looked for diseased stock or shot any animals injured on site. One noted with regret at the time in advocacy magazine, Our Animals, that, in truth, the laws “were insufficient to cover the many diversified abuses at such exhibitions.” As a result, rodeo people could affect the appearance of self-regulation and reform while still giving the audience and competitors what they wanted.

Steer busting still goes on, of course, at private ranches, early morning slack rodeo competitions or baldly out in the open at the annual Cheyenne Frontier Days in Wyoming where the rodeo committee caters to local interests.

You won’t see steer busting at the Calgary Stampede, though. Back in the 1920s, officials decided to instead promote chuckwagon races, a sport native to the Canadian Prairies. The Stampede had tried steer busting briefly, received too many complaints, so replaced it with steer decorating competitions in which competitors jumped off a running horse to tackle a steer merely to decorate one horn with an elastic band bearing a small flag, as Rodeo Sports News explained it to American rodeo people on May 15, 1957.

At elite levels, rodeo events are controlled by small groups of competitors and officials, dedicated to their sports and reluctant to be seen bowing to public pressure. The broader rodeo community, raw from decades of criticism, humours them.

After the show, in the truck driving home, plenty of barrel racers and bronco riders will tell you they don’t like the chuckwagons and the bad publicity it brings, but that they keep quiet out of loyalty to a sporting community they love.

By Prof. Susan Nance, Department of History. A version of this article first appeared in NiCHE: Network in Canadian History & Environment.