U of G Grads to Reconnect at Alumni Weekend 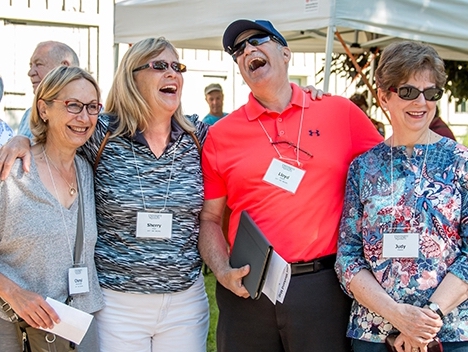 The largest University of Guelph alumni event of the year is set to take place June 21-23, when hundreds of graduates return to the campus they once called home for Alumni and Reunion Weekend.

Featured events this year include campus tours, a craft beer tasting, a field trip to Elora Gorge with faculty from the Department of Geography, Environment and Geomatics, and a gala to celebrate the 50th anniversary of the founding of the School of Hospitality, Food and Tourism Management (HFTM).

Once known as the School of Hotel and Food Administration, HFTM now has more than 5,000 alumni working around the world, many of whom will return to Guelph to celebrate.

Also this year, the Interhall Council (IHC) will celebrate its 50th anniversary with a celebratory reunion dinner. The IHC is the residence hall association for U of G and was founded in 1969. Representing 5,000 residence students, it’s become the largest residence student government in Ontario.

Three distinguished alumni will be honoured at this year’s Awards of Excellence Gala. They are:

Tony and Anne Arrell will receive the Alumni of Honour Award. The Arrells’ connection to U of G began when the couple were both students, graduating in 1967 and 1968, respectively. They went on to corporate careers in Toronto but stayed connected to the area through weekend farming. Through their Arrell Family Foundation, they have been generous, long-time donors to U of G with annual student scholarships. In 2017, they made a $20-million gift to the University to establish the Arrell Food Institute, which focuses on Guelph’s strength in food research.

Nancy Brown Andison will be presented with the Alumni Volunteer Award. Andison graduated from U of G with a bachelor of agricultural science in 1979 and went on to a career in corporate management. She has been a member of the U of G Board of Governors since 2014, providing guidance and oversight on several committees, and volunteers often as a guest speaker in Ontario Agricultural College undergraduate classes.

Angela Liddon is the recipient of the Young Alumni Award. Liddon graduated from U of G in 2006 with a BA in psychology and soon began the popular vegan and plant-based blog Oh She Glows. She’s amassed a huge social media following, has written two internationally bestselling cookbooks and has created an award-winning recipe app.

Alumni Weekend will also feature the popular ice cream technology tour, as well as tours of the Arboretum, the Honey Bee Research Centre and the MacNaughton Observatory.

For more details and to register, visit the Alumni Weekend website.