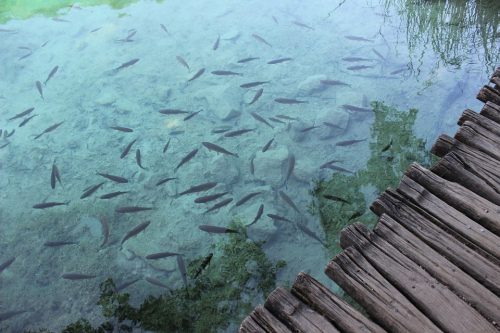 Warmer temperatures are having a ripple effect on food webs in Ontario lakes, according to a new University of Guelph study.

Researchers have found warmer average temperatures over the past decade have forced fish to forage in deeper water. There they hunt different prey species, causing a climate-induced “rewiring” of food webs, altering the flow of energy and nutrients in the lake.

Monitoring the movement of generalist species like lake trout may offer an early warning system for impacts of climate change on ecosystems.

“We can harness the natural capacity of species to detect and respond to changes in their environment,” said Tim Bartley, a post-doc in the Department of Integrative Biology and study lead author. “As species are changing their behaviour, they are telling us about what’s happening around them in their environment. We can use this information. The behavioural changes we see imply major reorganization of ecosystems.”

Published in the journal Nature Ecology and Evolution, the study entailed tracking lake trout movement and feeding in hundreds of lakes in northwestern Ontario.

Bartley caught fish to analyze their tissues to see what they ate. The team also used similar data about fish-feeding habits and locations across the province from the Ontario Ministry of Natural Resources.

Tissue analysis showed that lake trout spend more time in deeper water than near shore, although the researchers were unable to identify specific prey species. Lake trout prefer to catch lake herring; Bartley said trout are flexible feeders that will eat other fish species as well as invertebrates.

He said warming may also be pushing lake herring into colder waters, meaning that lake trout may still feed on them in offshore locations.

Monitoring behavioural changes in species such as lake trout is important for humans who rely on ecosystems for resources and services from food to water quality, said Bartley.

Climate change effects are complicated and vary within ecosystems to create a patchwork of new conditions, he said. Other organisms, including lake trout prey, are also moving in response to warming

Tracking the movement, feeding habits and condition of generalist species such as lake trout may give resource managers an early warning system for detecting the effects of warming. That’s important for managing the entire ecosystem and for looking after populations of lake trout, a popular sport fish for anglers, said Bartley.

But it’s not just happening in lakes.

The U of G researchers point to other studies of climate change effects on rewiring of ecosystems involving beluga whales and halibut in Nunavut, polar bears and ringed seals across the Arctic, and Kodiak bears feeding on elderberries and sockeye salmon on the Pacific coast.

The report’s authors, including integrative biology professors Kevin McCann and Andrew McDougall, concluded: “With further research, we can harness generalists’ responses to predict functional outcomes of climate change on the world’s ecosystems.”

The study was funded in part through the Canada First Research Excellence Fund, through the University of Guelph’s Food from Thought program.