The provincial government will invest up to $713 million toward a unique agreement between the University of Guelph and the Ontario Ministry of Agriculture, Food and Rural Affairs (OMAFRA) to further discovery and innovation and position Canada as a world leader in agri-food.

CBC News reported on the announcement on Feb. 14.

Through the renewed OMAFRA-U of G agreement, OMAFRA and U of G will build on world-class agri-food research, including new advances in artificial intelligence, big data analytics and precision agriculture.

The agreement brings together academia, government and industry to support and enhance Ontario’s agri-food sector through cutting-edge research and innovation.

The commitment to the agreement was renewed for another 10 years today during an event at U of G attended by leaders from industry, government, and academic institutions.

“The partnership has led to breakthrough discoveries and revolutionary advancements during the past two decades. It demonstrates the profound impact that government and universities can have when they work closely together with shared goals,” Vaccarino said.

“This novel partnership has positioned Ontario and Guelph as the epicentre of agricultural research and innovation in Canada, and supported industry development and growth – contributing billions to Ontario’s economy.”

Jeff Leal, Minister of Agriculture, Food and Rural Affairs and the Minister Responsible for Small Business, said: “Our government looks forward to continuing to partner with the University of Guelph to ensure Ontario’s agri-food sector is the most innovative and productive in the world, producing the highest quality and safest food for Canada and the world.”

Agri-food is a leading Ontario economic sector, contributing more than $37 billion to the province’s economy and employing more than 800,000 people.

As highlighted by Dominic Barton and the Advisory Council on Economic Growth, Canada can be a global leader in agri-food, with new value-added products, technologies, and solutions, said Malcolm Campbell, U of G’s vice-president (research). 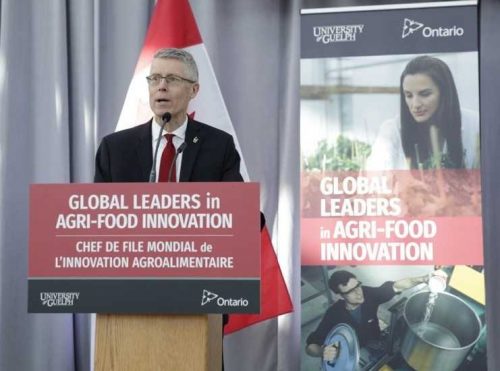 He added that one of today’s great global challenges is safely feeding the world’s rising population while protecting the environment.

“It’s a hefty challenge, but U of G, as Canada’s food university, is up to the task. We have a 150-year legacy in agri-food and a reputation for innovation and discovery,” Campbell said.

U of G is first in Canada and 14th in the world for agricultural science according to the U.S. News & World Report ranking of best global universities for agricultural sciences. The Ontario Veterinary College is first in Canada, third in North America and sixth worldwide among veterinary colleges in a ranking by Quacquarelli Symonds, which names the world’s best universities in 46 academic subjects.

The University’s $77-million Food from Thought research project, funded by the federal government in 2016, is creating novel tools for producing more and safer food while also protecting the environment.

Under the new agreement, the University receives up to $71.3 million a year to manage research and innovation programs and related facilities, including the Ridgetown Campus, the Agriculture and Food Laboratory program, the Animal Health Laboratory program, and 15 research stations and centres.

Examples of innovations stemming from the OMAFRA-U of G Agreement: