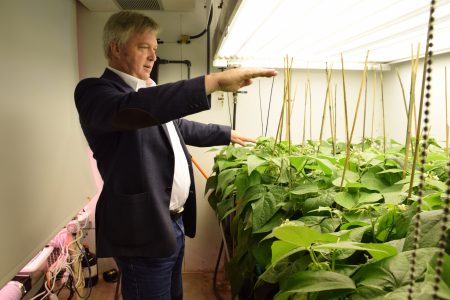 This article originally appeared in The Conversation Canada and was picked up by the Ottawa Citizen and National Post.

If you’ve ever seen the film The Martian, you’re familiar with “plants in space.” The protagonist in the film, played by Matt Damon, successfully harvests potatoes on Mars to feed himself when he’s stranded on the planet.

Far-fetched? Not at all.

Here at the University of Guelph in our Controlled Environment Systems Research Facility (CESRF), we’ve been investigating controlled-environment plant production and how best to get the most out of plants in terms of food, oxygen, fresh water and carbon dioxide scrubbing — in other words, human life support —for decades. Since the mid-1990s, we’ve been home to the Space and Advanced Life Support Agriculture program.

These research activities form Canada’s contribution to the niche field of space exploration known as “biological life support” — or plants in space.

Research and technology developments in this field include: 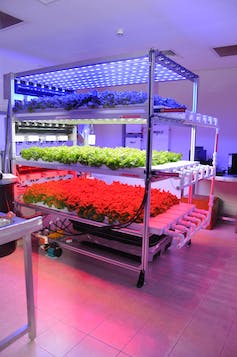 Among the more recent tools in the pursuit of high-density production of a range of crops are light-emitting diodes (LEDs) as a source of photosynthetic energy. In our research facility, we’re working to refine and perfect LED technology.

The advent of ever-increasing intensity and efficiency of LEDs has expanded their use beyond cars and street lights. We now routinely consider LEDs as supplemental, or even sole-source, lighting for plants.

LEDs have a unique narrow wave band of light that represents a small sub-section of the solar spectrum. There are many examples of LEDs that virtually fill the spectrum of visible light and beyond to include ultraviolet bands and far-red to infra-red components.

We know quite a bit about how plants respond to various wavelengths, and certain combinations of wavelengths of light, based on research with filters and other more conventional lights that include high-pressure sodium, metal halide and fluorescent lighting.

Improving upon the sun

However, LEDs offer the opportunity to design a spectrum and assess the responses of plants to some very unusual colour combinations.

Among the suite of environmental variables that optimize plant production, the most powerful in determining just how a plant responds to its context is lighting. Indeed, with the new attributes of LED lights, we can seemingly improve upon the sun in the production of various plant commodities. 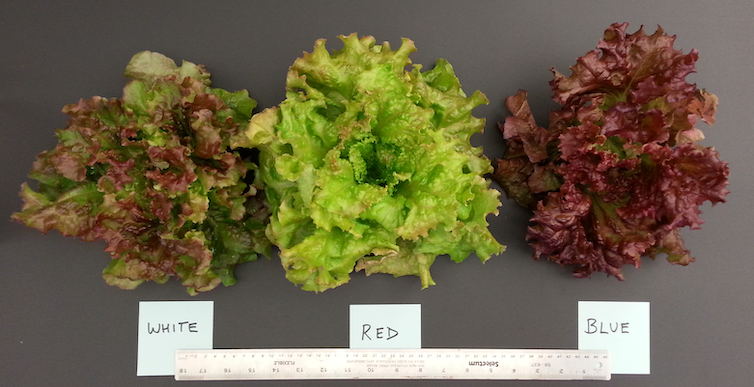 Results of lettuce plants grown under the three different light spectra showing differences in accumulated biomass and expressions of anthocyanin (pigment) in the leaves. These plants also tasted different, indicating additional secondary metabolite responses to the colour of the light.

The latest research findings on various spectral qualities — colours, in other words — provide details on specific responses in some plants related to the plant’s size, shape and photosynthetic efficiency. We can even modify the content of metabolic compounds that influence the colour, taste and medicinal properties of a plant.

Those medicinal properties have attracted the scientific and industry communities in the evolving phyto-pharmaceutical — medicines from plants — sector.

Low-cost production of reproducible, high-quality medicinal compounds is the main focus of the sector, and the range of commodities is growing rapidly. They include cancer drugs, vaccines for a range of viral pathogens, antibodies and, of course, cannabis or marijuana. Cannabis has a new-found status due to changes in laws in Canada and elsewhere governing the use of this unique plant.

But these technologies, especially LED lights born in Canada’s space exploration research community, bring with them the responsibility to get it right — and the danger of getting it wrong is very real.

Early attempts in the recreational cannabis community a number of years ago when LEDs were deployed as a photosynthetic light source in efforts to reduce energy usage in basements and closets didn’t work so well.

It became obvious to those early pioneers growing cannabis under LEDs that something was amiss. The vague idea that some red and blue lights would do the job was quickly dispelled, but the stigma of those early failures still haunts the proponents of LEDs in that sector today.

We’ve come a long way since those missteps and misconceptions about how to use LEDs, but we have more work to do.

Researchers at the University of Guelph’s CESRF have been working with industry collaborators in the phyto-pharmaceutical sector (Plant Form Corp.), the medical cannabis sector (ABcann Medicinals Inc.), the LED sector (Intravision Light Systems) and the controlled environment sector (Conviron Ltd.) to refine recipes of environment control to grow plants for medicinal purposes.

We’re also working to develop the best management practices to serve these industry sectors and the Canadian public — as we seek to make the most of the latest technologies in controlled environment plant production.

And given U.S. President Donald Trump’s recent comments about sending American astronauts back to the moon and Mars, there’s every likelihood that we’ll get to test our “plants in space” expertise some time soon.

Mike Dixon is a professor in the School of Environmental Sciences and director of U of G’s Controlled Environment Systems Research Facility. He works with NASA and the German Aerospace Center on projects to grow plants in extreme environments, including space.