Thanks to the outstanding generosity of the University community, we surpassed our 2017 goal and raised an incredible $632,000 for Wellington Dufferin Guelph United Way!

President Franco Vaccarino was on hand when the 2017 United Way campaign total was announced at an event celebrating this year’s campaign volunteers. 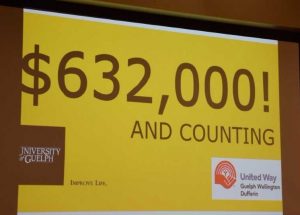 “Our annual United Way campaign demonstrates the power of bringing together resources, ideas and shared commitment toward a common goal – improving lives in our local community,” said Vaccarino.

Campaign co-chair Catherine Carstairs was overjoyed with the final tally. “I’m so proud of what we’ve been able to accomplish as a University,” she said.

“The United Way not only brings us together as a community, but it helps us make Guelph Wellington Dufferin a better place to live.”

The 2017 campaign involved students, faculty and staff from across campus and included dozens of fundraising events.

Peter Routledge, campaign co-chair, says, “Volunteering for the United Way takes time and effort, but it is never work. It’s just something that you love to do.”

This is the sixth year in a row that we have surpassed our goal and the ninth time that U of G has raised more than $500,000 in a campaign.

Everyone who submitted a pledge card for the 2017 United Way campaign was entered in the grand prize draw. Congratulations to our winners!

This year, our United Way tuition raffle was bigger and better than ever with some fantastic new prizes. Congratulations to our student winners!

Orpen added, “Guelph is our home for a good few years. Supporting the United Way helps show our wider community that we care and truly feel connected here.” 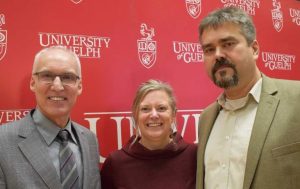 Recognizing Our Outstanding Volunteers
This months-long campaign relies on a huge number of volunteer coordinators, canvassers and event leaders. At the campaign closing lunch on Dec. 1, awards were presented to campaign volunteers who went above and beyond.

Congratulations and thank you to everyone who supported this year’s campaign through pledges, donations and campus events. Together, we did something amazing!