The University of Guelph will aim for its highest-ever United Way fundraising target this year, said president Franco Vaccarino during the University’s 2017 campaign launch today. 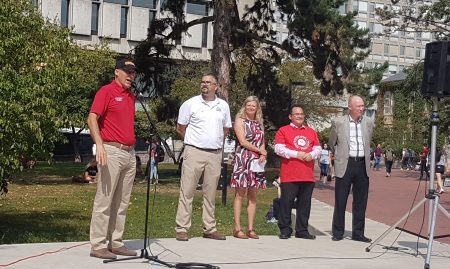 Some U of G members also reached new heights during today’s United Way kickoff barbecue in Branion Plaza, getting an overview of campus aboard a ladder truck from the Guelph Fire Department in return for a small donation to the campaign.

Vaccarino announced this year’s fundraising goal of “$620,000 and beyond,” the University’s highest-ever target.

“Last year was our most successful campaign ever, as we raised $640,000, which was $40,000 over our goal,” said Vaccarino, noting U of G received the 2016 Campaign of the Year award for the public sector.

“The campaign allows us to deepen connections between the University and our wider community. Together we strive to meet existing and emerging societal needs in order to improve life, our singular purpose here at the University of Guelph.”

Ken Dardano, executive director of the local United Way, said U of G’s campaign is critical for many community agencies and programs.

“We are very lucky to have the support of the entire University community, from students to retirees, year after year,” he said. 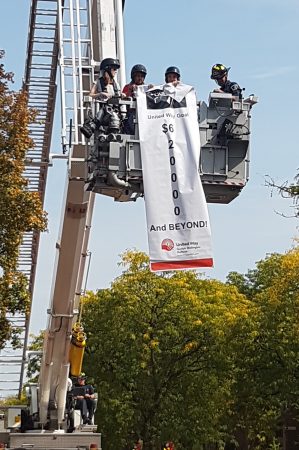 Dardano said University members’ commitment to the campaign “speaks to their generosity and understanding of the importance our funded agencies have in our greater community, and how they can enrich the experience of their students and families.”

Prof. Catherine Carstairs, chair of the history department and co-chair of this year’s campus campaign, said: “U of G’s United Way campaign brings us together to support people in need in Guelph Wellington Dufferin. It’s part of what makes the University the compassionate community it’s known to be.”

Added co-chair Peter Routledge, information systems manager with Student Housing Services: “The time we give to the United Way will never equal what the United Way gives back to us — whether it be gaining new friendships, being inspired by over 180 dedicated campus volunteers, or the satisfaction of knowing we are helping those who need it most in our community.”

Student co-chairs Sasha Monteiro and Remy Orpen, who unveiled the campaign goal from the fire truck, said they hope to increase student involvement through events, including a $1,000 tuition raffle offered for the second straight year.

The United Way is marking its 77th year in Guelph Wellington Dufferin. Visit uoguelph.ca/unitedway for updates and events during the 10-week campaign.