The University of Guelph’s 2016 United Way fundraising campaign officially launched today with the campus community gathering for music and food at the annual kickoff barbecue in Branion Plaza.

U of G president Franco Vaccarino announced this year’s fundraising goal: $600,000 and beyond. 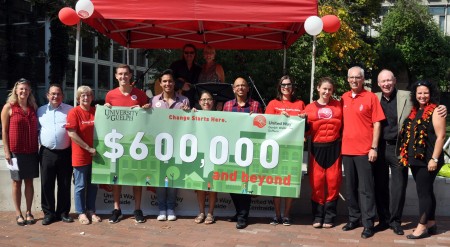 “This is, of course, an ambitious goal but it’s a goal I’m confident we can achieve,” said Vaccarino, noting U of G’s objective ties in with the United Way’s regional theme of “$3.6-million and beyond.”

“This University has experienced what we can do and how high we can keep our bar raised when we come together with a sense of common purpose.”

In 2015, U of G raised $632,500 — $25,000 above its goal and a new University record — earning it the “Campaign of the Year” award in the public-sector category from the United Way Guelph Wellington Dufferin.

“I can’t tell you what that means for our community. This past year we were able to fund 92 community service programs from youth shelters to seniors’ programs to food pantries.”

U of G’s United Way campaign is one of the top campaigns in the country, and it’s one of the largest contributors to the regional campaign, Dardano said.

The University’s United Way co-chairs – Patricia Tersigni, director of academic programs and policy in the provost’s office; Prof. Catherine Carstairs, chair of the history department; and students Kimberly Hu, Sasha Monteiro and Matthew McCoy – are eager to help the campus eclipse the $600,000 mark for the fifth straight year. 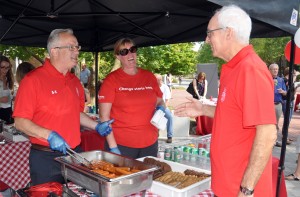 “Over the past few months, I’ve gotten to know United Way givers and volunteers across campus and beyond, and it’s been a real pleasure to see your passion for your community and your desire to do something for people in need,” Carstairs told the crowd.

“All of those who give to the United Way make Guelph a better place to live. Thanks to you, there are more people with housing, more people who can read and write, and more people with disabilities living full and active lives in the community.”

Added Tersigni: “This campaign embodies what the University of Guelph is all about – Gryphon pride in being a helping and caring community.”

The United Way is in its 76th year in Guelph Wellington Dufferin. Visit www.uoguelph.ca/unitedway for updates and events during the 10-week campaign.