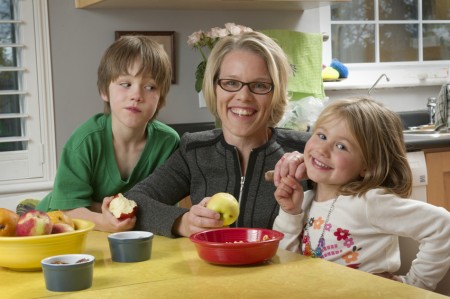 Prof. Jess Haines with her children at home

Editor’s Note: This article originally appeared in The Conversation Canada. It was also published by the National Post and the Daily Mail, among others.

If you have a picky eater at home, you aren’t alone. Almost 50 per cent of parents identify their preschoolers as picky eaters.

Picky eaters can make mealtimes hectic. Concerns about wasted food and about whether your child is eating enough “good” foods and not too many “bad” foods (or even enough food at all) are common challenges. Ensuing power struggles can make mealtimes a drag. And planning around your child’s preferences can be almost impossible.

There’s good news, however: Some of the behaviours typically displayed by picky eaters, like refusing new foods and going through food jags (times when your child only wants to eat their favourite food) are normal.

Research suggests that with time and repeated exposures — without pressure — most children will accept new foods. You can also breathe a sigh of relief: The vast majority of children who are considered to be picky eaters do not actually have severely restricted diets or sub-optimal growth.

As researchers in nutrition, we have conducted studies with families and have learned several strategies you can use to create happier, and healthier, mealtimes. This, and other feeding research with young children, has identified five things you can do to reduce mealtime stress and help your “picky eater” have a healthier diet.

The first step for exhausted parents is often a shift of perception.

During the preschool years, slowed growth (in comparison to the fast growth seen during infancy and toddlerhood) can impact dietary intake. So can psychological changes like developing a sense of independence.

As agents of their own preferences and actions, preschoolers prefer to feed themselves. They can develop strong opinions toward foods.

By labelling our children as “picky eaters,” we are labelling behaviours that are considered to be developmentally appropriate as non-compliant.

When we view children’s rejection of foods as non-compliant, interactions with our child during mealtimes often become stressful. We tend to focus on getting our children to comply with our requests, rather than promoting a healthy relationship with food.

Phrases like “you must eat three more bites” become common. This may lead to an escalating cycle of disagreement between you and your child.

In some situations, this escalating cycle of pressure and refusal may also lead you to withdraw your efforts to entice your child to eat, catering to their preferences and allowing poor dietary habits to prevail.

Rather than view children as non-compliant, we can recognize this show of independence at mealtimes as completely appropriate for their age. Your child will be discriminating based on newly recognized qualities of foods such as taste, texture, presentation and familiarity.

Focus your attention on fostering your child’s healthy eating without pressuring. Enjoy the time spent together during meals, rather than focusing on your child’s intake.

2. Accommodate, but don’t cater to them

Accommodating your child’s preferences during mealtimes is a win-win: They exert some independence while also eating the food you have prepared.

During the meal-planning stages, ask your child what he or she would like to eat for the week or take your child grocery shopping and ask them to pick out a vegetable to try.

Accommodating children’s preferences doesn’t mean you need to eat chicken fingers every night. If you’re serving a spicy Thai dish, consider making a version with less spice for your kids.

Meals that allow preschoolers to serve themselves also work well so that they can negotiate the amount or nature of the food (for example, not including the sauce).

Don’t pressure your child to eat foods they don’t like. It is OK if your child doesn’t like broccoli.

U.K. researchers tested a variety of methods to encourage young children to try disliked vegetables. They found that after 14 days, the most successful strategies included a combination of repeated daily exposure, offering non-food rewards for trying the disliked food and parents eating the same food as the child.

Even if a food has initially been rejected, try and try again (without pressuring). It can take between 10 to 15 exposures to get a child to like a new food.

It is easier to get a child to taste a new food rather than eat it. So start by offering small portions.

Using rewards such as stickers may improve your kid’s acceptance of new foods and make repeated exposures more fun. Praise your child for trying new foods, but remain neutral if they choose not to eat it.

Eating with your child when offering new foods is also important. You can’t expect your child to eat veggies if you don’t eat them either!

Children with parents who model healthful eating habits have been reported to be less “picky,” to be more likely to try disliked vegetables and to eat more fruits and vegetables.

Getting the whole family involved in meal preparation can relieve mealtime stress.

You don’t have to do it on your own! Have your child wash foods while you chop, or set the table while dinner is in the oven.

Research shows that kids who are involved in preparing meals have more positive attitudes toward food and are more likely to subsequently eat the food that they help to prepare.

By giving your child the sous-chef title, you are helping increase their consumption of healthy foods in the short term and teaching lifelong habits.

Check out these age-appropriate tasks for getting your tots involved in the kitchen!

For ideas on kid-friendly recipes, check out these delicious recipes developed by researchers at the Guelph Family Health Study.

By allowing your child to develop their own taste, preferences and enjoyment of healthful foods, you will make family mealtimes more enjoyable in the short term and improve your child’s diet over the long term.

Jess Haines is a professor in the Department of Family Relations and Applied Nutrition. She is a lead investigator in the Guelph Family Health Study, which is tracking 3,000 young families in Guelph Wellington over a 20-year period to see how lifestyle changes affect children over time.

Kathryn Walton is a registered dietitian and a PhD candidate in the Department of Family Relations and Applied Nutrition.