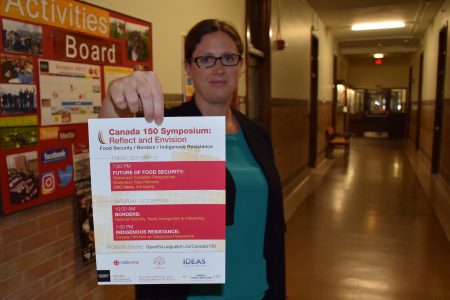 The University of Guelph’s “Canada 150 Symposium: Reflect and Envision” will feature dialogue and debate on subjects relevant to Canada’s past, present and future.

A reprise of a U of G symposium held 25 years ago — one related to the potential breakup of Canada — the Oct. 27-28 event will explore food security, border issues and Indigenous resistance, all currently affecting the country.

A thought-provoking performance art piece by the Kika’ige Historical Society will be a highlight of the symposium.

Meghan Clark, manager of marketing, communications and enrolment in Open Learning and Educational Support, says: “The symposium is for anyone who has a general interest in these subjects and wants to get involved in the dialogue. There are three very different topics of conversation, but they are three very relevant and current topics.”

Panellists include geography professor Evan Fraser, director of U of G’s Arrell Food Institute; food and social justice activist Tammara Soma; Tim Benton, a University of Leeds professor of population ecology; and Dawn Morrison of the BC Food Systems Networking Group on Indigenous Food Sovereignty. The discussion will be moderated by CBC Radio host Paul Kennedy and recorded for broadcast Nov. 16 and Nov. 23 on the Ideas program.

On Oct. 28, David Akin, chief political correspondent for Global News, will moderate a panel discussion on “Borders: National Security, Trade, Immigration and Citizenship.” The event will begin at 10 a.m. in War Memorial Hall.

International affairs experts on the panel will be lawyer Jacqueline Swaisland, a specialist in Canadian citizenship, immigration and refugee law; author and lecturer Amarnath Amarasingam; and Christopher Sands of the Center for Canadian Studies at Johns Hopkins University.

An “Indigenous Resistance” panel will feature the Kika’ige Historical Society, a performance art trio of U of G Profs. Kim Anderson, Department of Sociology and Anthropology, and Brittany Luby, Department of History; and Lianne Leddy, an Indigenous studies professor at Wilfrid Laurier University (WLU). Along with Bonnie Whitlow, an Aboriginal support coordinator at WLU, they will discuss Indigenous perspectives on Canada 150 and Confederation.

The Kika’ige performance will begin at noon and the panel at 1 p.m., both in Creelman Hall.

OpenEd will co-host the event with the College of Social and Applied Human Sciences and the Arrell Food Institute. Register at OpenEd.uoguelph.ca/Canada150 for the symposium. About 400 attendees are expected.

Organizers view the event as an “extension” of the symposium held 25 years ago at U of G.

“Twenty-five years ago, we met to consider the future of Canada as a country,” said Byron Sheldrick, associate dean (academic) in the College of Social and Applied Human Sciences. “Today, while our future may no longer be in question, we still face many problems and issues.  Canada is poised to play a leading role in offering solutions to pressing issues of both national and global importance. This dialogue is an important opportunity to play a role in that process.”