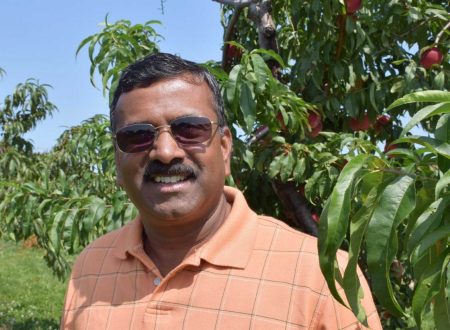 “You’ve got to be patient in this game,” said U of G plant agriculture professor Jayasankar Subramanian, who is among Canada’s leading tender fruit breeders — and currently the only peach breeder in the country.

But an 18-year lab-to-market timeline, he added, is on the quick side.

Developing a new tender fruit variety is a daunting process. Years of selective breeding, careful study, and grower and consumer input go into bringing a new selection to market. It can take more than 20 years to bear new variety fruit, he said.

The new varieties were produced at U of G’s tender fruit breeding facilities, in partnership with the Vineland Research and Innovation Centre (VRIC) in Ontario’s Niagara Region.

Each has unique, advantageous properties, and both are in the test growing stage.  So far, grower reviews have been positive, and word about the new varieties is spreading among growers circles, Subramanian said. 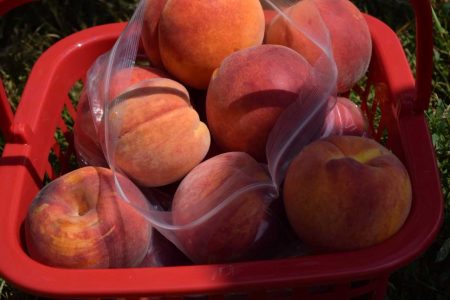 Ontario-grown yellow plums are in high demand on the local market, and a considerable portion of the general plum harvest is exported. The market appears ripe for a variety that is slightly bigger, with more post-harvest durability. The new selections have just such properties.

Subramanian said there are enough “clean” buds available for the two new plum varieties to produce enough trees for large-scale planting. Growers can then obtain those trees and produce fruit for the market.

The new U of G peaches are also getting the attention of growers.

“They want it released as quickly as possible,” Subramanian said. “Both peaches are early season varieties.”

Growers are champing at the bit over the new peach selections because of the market advantage they offer.

Early July is when peaches from the United States start arriving in Ontario grocery stores, Subramanian explained. If Ontario peach growers can have fruit ready to ship around the same time, they could get a jump on the imports and achieve a better price for their product.

“From flowering to fruiting is the key here,” Subramanian said. “Peaches, whether they are an early or late variety, all flower within that 10-day window in May. But some of them fruit early and some fruit late. It is the maturity period of the fruit that determines when the final product will hit the market.”

The U of G plum varieties have special characteristics that make them desirable. One is larger than other yellow Japanese varieties, Subramanian said, and is about the same size as black and red plums currently on the market.

He said the new variety is a complement to the popular, time-tested Shiro variety, which is smooth, sweet and petite.

“This could even eventually replace Shiro in the local market,” Subramanian said. He added that Shiro plums tend to become translucent, as well as soft and watery, a week or 10 days after picking. The new selection does not share those tendencies, which is something much appreciated by growers.

Fruit breeders assess the potential of new varieties based on about 20 characteristics, most related to fruit properties, disease resistance and the growing season. That’s the science side of breeding.

Growers look for other characteristics, including the size and shape of trees, how quickly they grow and fruit, how often the fruit has to be picked and its storage traits.

Growers are integral to the process of bringing out a new variety. Representatives from the Tender Fruit Evaluation Committee, who follow current retail trends, look in on the progress of new varieties each week.

The vital pre-release taste-testing component is often achieved through Ontario Tender Fruit events, where the varieties are made available, Subramanian said.

During a recent event at the Vineland Research and Innovation Centre, near St. Catharines, Prof. Alan Sullivan, Plant Agriculture, said VRIC represents a “model research program” and one that enjoys “great respect from local grower organizations.”

Vineland employs more than 100 research and support staff, many of them U of G graduates.