Editor’s note:  This article originally appeared in The Conversation Canada. 2017 marks the sesquicentennial of Confederation. While the anniversary is a chance to reflect on the past,  The Conversation Canada asked academic authors to look down the road a further 150 years. U of G geography professor Evan Fraser, director of the Arrell Food Institute at the University of Guelph, considers how we will feed ourselves in the future. 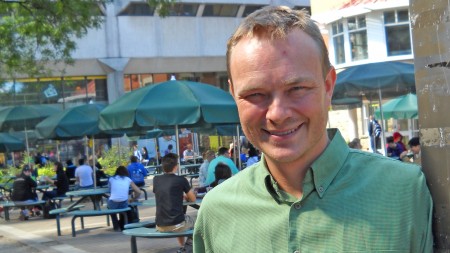 Agriculture and food systems will be as unrecognizable to Canadians 150 years from now as modern farming would be to people in 1867, when it was small-scale, dependent on draft animals and extremely local. Emerging trends point to changes that will likely reshape what we eat and how we produce it.

Radical shifts in climate, economics and technology will transform our major food sources over the next 150 years, research suggests.

I have studied global food security for years, and currently focus on how we can sustainably feed the growing population that is expected to reach 9.5 billion by mid-century in the face of rapid climate and economic change.

In 2016, Prime Minister Justin Trudeau proposed that Canada create a national carbon pricing scheme to pay for the effect of our economy and our lifestyles on the environment. This would push food prices higher because agriculture contributes about one-third of global greenhouse gas emissions.

The effect of carbon pricing is likely to disproportionately affect livestock producers — in particular beef, which requires significant energy, feed and water.

In 150 years, therefore, it is likely that we will be eating far less livestock and will instead be consuming a range of alternative proteins.

The carbon price and more expensive protein might hurt consumers’ bank accounts in the short term. In the longer term, however, these forces will create new market opportunities for low-energy food products. As a result, food scientists across Canada will explore low-energy protein supplies such as plants, fungi, algae and insects.

Although each of these sources of protein is relatively unknown to general consumers today, I expect an explosion of novel protein products to enter the market within a generation.

Initially, we will likely see plant-based proteins mixed with livestock proteins to reduce the overall carbon footprint of our diets. But as consumers become used to these new ingredients, these products will became a regular part of the Canadian diet.

Edible insects, algae-based protein drinks and lab-grown “meat” will all become common. For example, “the Impossible Burger” that is made with no beef but tastes like a beef burger is making inroads into restaurants across North America.

Breakthroughs in the early 2000s in LED light technology linked with a better understanding of how different wavelengths of light affect plant growth are allowing us to develop new ways to produce food indoors. These innovations will almost certainly give rise to indoor growing facilities that range in scale from micro “farms” that fit into shipping containers to multi-storey vertical farms.

By 2167, it’s likely that these sorts of facilities will be common across the country. The ability to produce food indoors using LED lights will mean that most Canadian communities will become much more self-sufficient in fruits and vegetables.

While most Canadians enjoy access to safe and secure food, there are major problems in our food system that cannot be addressed by single governmental ministries. For instance, First Nations communities in Canada’s North have rates of food insecurity normally associated with the global South. To address this, Canada’s federal government launched a National Food Policy in the spring.

Also this year, Ottawa announced funding to create a series of “innovation super clusters,” one of which is expected to focus on agriculture and food. The aim is to develop a partnership among industry, government and academia for an innovation hub to catalyze a “digital agri-food revolution” — a Silicon Valley for food.

The anticipated long-term impact of these two initiatives is to ensure that Canada becomes a key player in global food exports, and that our own food system provides safe, sustainable and nutritious food for all Canadians.

So Canadians will support local farms even as much of the agri-food industry develops stronger export markets.

These factors will lead to local food networks around major Canadian communities, and mainstream food production that is capital-intensive and export-oriented.

These developments, along with our abundant land and fresh water, our good infrastructure and our likely benefits from climate change due to a longer growing season (unlike the mid-latitude parts of the planet that will lose productivity), point to a likely future: Canada will become even more important for global food production over the next 150 years.