Three cutting-edge University of Guelph research projects in genomics –  one of today’s most rapidly developing and powerful areas of science and technology – received $10.7 million in support today to improve animal health and welfare, crop yields and food production.

U of G researchers received three of five GAPP awards granted this year.

Kate Young, parliamentary secretary for science, made the announcement on campus along with officials from Genome Canada, Ontario Genomics, industry partners, and other government and university officials.

The five GAPP projects will receive a total of $17 million — $6 million through Genome Canada and $11 million from other sources including the private sector and provincial governments.

“This is wonderful news for the University, highlighting our great strengths and capacity in research, innovation, and partnerships,” said Malcolm Campbell, vice-president (research).

“It also speaks to our reputation for translating knowledge and discoveries into applications that have the potential to improve life.”

All three U of G projects will provide novel opportunities for Canada’s agri-food industry through cutting-edge technologies, strategies and products, Campbell added.

“Agri-food is a defining issue of our time, and U of G, building on its foundation of more than 150 years of bountiful innovations in agriculture and food, is uniquely positioned to make a difference.”

Animal biosciences professor Christine Baes received $6 million to head a project with Hybrid Turkeys based in Kitchener, Ont. She is the holder of the Semex – Canadian Dairy Network (CDN) – Holstein Canada Professorship in Dairy Genomics. Adapting technology she developed in other livestock species, Baes will identify genes for traits to improve turkey health, welfare and productivity.

Early research suggests that this genomic selection technology will help the turkey industry grow by some $39 million in the next five years. Selecting more feed-efficient birds will also help the environment through less manure and fewer greenhouse gases.

Increasing canola yields is the goal of a $3.4-million initiative headed by plant science professor Peter Pauls. He will adapt technology developed with U of G molecular and cellular biology professors Michael Emes and Ian Tetlow to improve crop productivity.

Canada’s canola industry generates $19.3 billion annually and provides 250,000 jobs. The industry needs new breeding techniques to increase yield by some 50 per cent in the next 10 years.

Pauls and his team will translate traits from other plant species to canola to increase yields while maintaining seed quality and soil conditions. Annual benefits are estimated to be $3 billion to $4 billion. The improved plants will also be commercialized.

The industry partner is Benson Hill Biosystems and its Canadian subsidiary, CanolaCo.

With demand for the product growing, Paramalat, Canada’s No. 1 producer, is looking to maintain its competitive edge.

Dairy farmers will also benefit through increased demand for Canadian milk for cheese making, with revenues for dairy farmers growing by an estimated $28 million a year.

Lloyd Longfield, MP for Guelph, said the Genome Canada funding will help U of G to strengthen Canada’s leadership in crop and protein production and environmental sustainability.

“Sustainable agriculture uses fewer chemicals and produces more food on the same environmental footprint, and it relies heavily on research such as the work being carried out at the University of Guelph,” he said. 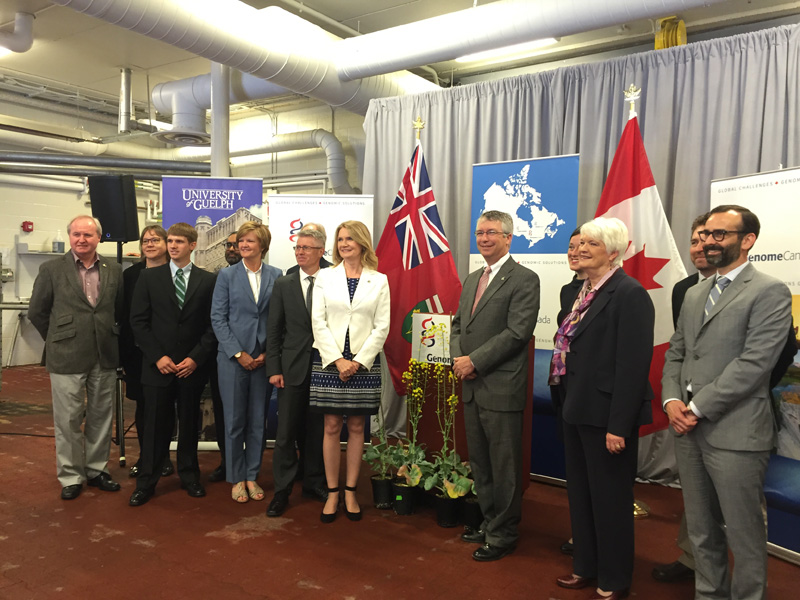