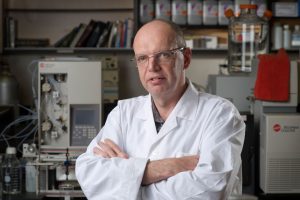 Profs. Keith Warriner and Jeff Farber, Food Science, were interviewed by CBC News and CBC Radio April 2, 5 and 6. They spoke with a number of CBC stations, including Toronto, Ottawa, Montreal, Calgary and Victoria. Warriner and Farber discussed bacteria in uncooked flour that could make people sick. They said uncooked flour, such as that found in raw cookie dough, can host E. coli bacteria, and we may need to handle flour in the same way that we handle uncooked meat. Recently, E. coli found in flour have made many people sick. The professors said that could mean the bacteria, previously not thought to be dangerous, is becoming more virulent. The best way to avoid illness, they added, is to always cook the dough. Warriner and Farber  both study food safety, pathogens and E. coli.