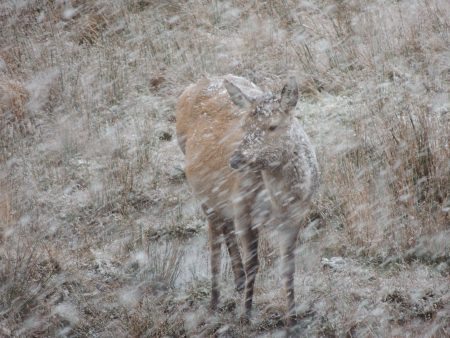 Red deer on Scotland’s Isle of Rum, where scientists are studying effects of precipitation change.

Climate change affects how plants and animals evolve, but temperature is less important in driving natural selection than rainfall and snowfall amounts, according to a new study involving a University of Guelph ecologist.

Precipitation influences natural selection in organisms more strongly than how hot or cold it is – a surprising result that further underlines the need to curb human-induced global warming, says Prof. Christina Caruso, Department of Integrative Biology.

She was among 20 scientists from Canada, the United States, Europe and Australia whose study was published recently in the journal Science.

The team put together a database of 168 published studies measuring natural selection spanning the past 40 years for various plant and animal populations.

Most of the data came from temperate zones in North America and Europe, ranging from Soay sheep in Scotland to damselflies in Sweden to wildflowers in Iowa – Caruso’s own research specialty.

The researchers found that 20 to 40 per cent of genetic changes in plant and animal populations stemmed from variation in local snowfall or rainfall.

Biologists are still not sure why this is the case, said Caruso, although they have ideas. 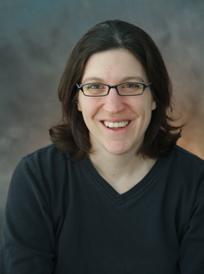 “Everything depends on what plants are doing. Any changes to plant growth and seed production will ripple through the food web,” said Caruso, one of only three plant ecologists in the global research group.

For many people, climate change may translate into higher temperatures. But there’s more to the story than that, she says. As the atmosphere warms, it can hold more water.

Global climate change will affect water cycles worldwide, she said. (March 22 is designated by the United Nations as World Water Day, intended to underline the importance of freshwater resources.)

Caruso said we can expect more precipitation with climate change as well as more unpredictable rain and snowfall. Depending on the region, that may mean extreme storms and flooding or drought, along with variable impacts on plants and animals.

“Climate change is coming and this study might tell us what will happen in the future. These data let us look at long-term changes across generations.

“Organisms have the potential to adapt to changes in precipitation. They have to evolve.”

Many researchers had expected that temperature would be a more important factor in natural selection of plants and animals.

Caruso said temperature spikes can cause immediate effects, such as a particularly hot summer leading to heat stroke and deaths. But she says many temperate organisms such as squirrels and birds “can tolerate thermal fluctuations without effect.”

She said the study underscores the need to include natural selection and evolution in environmental decision-making.

“Climate change is happening now and evolution is happening now. It’s not just the past or long time periods. Climate is changing and organisms are adapting now on human time scales.”