A new gene mutation discovered in dogs by an international research team including a University of Guelph professor may help better diagnose and treat one of the most common kinds of epilepsy in people.

Screening for similar gene changes in human patients may give clinicians a new tool for treatment, including potential new drugs, said Fiona James, a clinical studies professor in the Ontario Veterinary College. 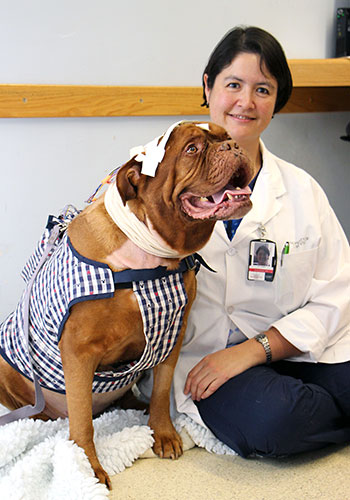 Prof. Fiona James studies how to treat epilepsy in dogs

The discovery is reported in a paper published this week in the Proceedings of the National Academy of Sciences by a team of researchers in Canada, Germany and Finland.

“If we have a better understanding of epilepsy, we can design better therapies, preventive testing and genetic counselling,” said James.

About 260,000 Canadians have some form of epilepsy, according to the Canadian Epilepsy Alliance.

The team found a defective Ras gene that causes myoclonic epilepsy in dogs.

Myoclonic epilepsy is one of the most common but poorly understood forms of the disease. It causes sudden jerking movements in patients, usually shortly after awakening from sleep.

To look at dogs’ brain activity, the team used a monitoring technique developed earlier by James. A similar system is used with patients at the Hospital for Sick Children in Toronto.

Involving a mobile backpack, the system allows clinicians to better detect seizures in animals that are awake and moving around normally. For this new study, the team worked with Rhodesian ridgebacks.

Epileptic seizures begin at roughly the same age in dogs and people, and humans and canines show similar clinical signs and response to drugs, said James.

A number of genes are known to be involved in epilepsy.

Current drugs are not always effective in treating various forms of the disease.

James said the Ras gene is part of a metabolic pathway new to researchers. That gives scientists and clinicians another route to learning more about epilepsy and developing new therapies.

“What it brings is hope,” said James, adding that this comparative study underlines the utility of animal models for understanding human diseases.