An award-winning artist and filmmaker will give the 2017 Dasha Shenkman Lecture in Contemporary Art next week at the University of Guelph.

Shirin Neshat, who was born in Iran and is now based in New York City, will discuss the development of her work from still photography to video installations to cinema and, most recently, to opera. The lecture will take place March 8, 6 p.m., in War Memorial Hall. 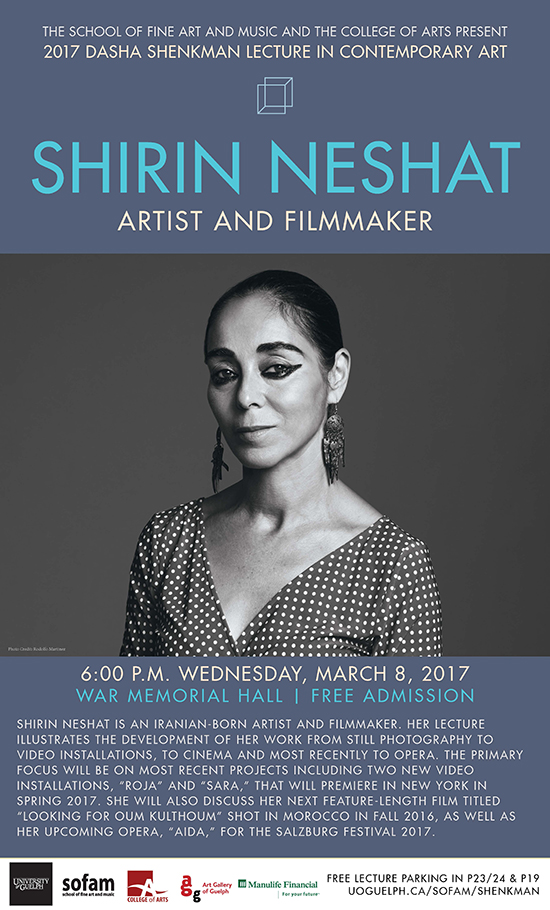 Neshat will discuss recent projects, including two new video installations — Roja and Sara – to premiere in New York this spring. She will also discuss her next feature-length film titled Looking for Oum Kulthoum, shot in Morocco last fall, as well as her upcoming opera, Aida, for the Salzburg Festival 2017.

Her early photographic works include the Women of Allah series, which explored gender and Islamic fundamentalism and militancy.

She has received the grand prize of the Gwangju Biennial (2000), the Golden Lion Award, the First International Prize at the 48th Venice Biennale (1999), the Hiroshima Freedom Prize (2005), and the Dorothy and Lillian Gish Prize (2006).

The free lecture is open to the public.

The Shenkman lectures are funded by Dasha Shenkman, a Canadian art collector and philanthropist living in the United Kingdom.

Visitors may view works by students in the master of fine art and undergraduate specialized studio programs during open studio sessions in Blackwood Hall, the Firehall and Alexander Hall. The studios will be open from 2 to 5:30 p.m. and from 7:30 to 9 p.m.