A noted artist, photographer and sculptor will deliver this year’s Dasha Shenkman Lecture in Contemporary Art.

Fred Wilson will speak about his museum installations of the past 25 years at War Memorial Hall on March 23.

The free event begins at 6 p.m.

Wilson, a 62-year-old Brooklyn-based artist, will discuss his recent sculptures in bronze and glass, which investigate the symbolism and meaning of the colour black. 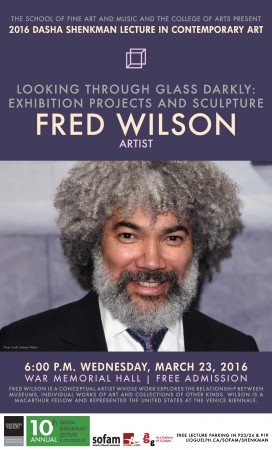 Wilson received a MacArthur Genius Award in 1999 and the 2002 Larry Aldrich Award, and represented the United States at the Venice Biennale in 2003.

Prof. Robert Enright, School of Fine Art and Music (SOFAM), said Wilson is “articulate, direct and one of the most subtly subversive artists working in contemporary art.”

Enright, holder of a University Research Chair in Art Criticism, said Wilson has worked to address societal issues through his art.

“Beginning in 1992 in a now famous exhibition at the Baltimore City Historical Society called Mining the Museum, he used the collection to draw attention to the city’s underlying attitudes towards race and culture,” Enright said.

“He is one of the most admired artists practicing art that falls under the rubric of institutional critique. It is a way of thinking about museums not just as artistic showplaces, but as places where the racial, political and social attitudes of a country reside. His installations are at once beautiful, informative and controversial.”

The Shenkman lectures are funded through a donation by Dasha Shenkman, a Canadian art collector and philanthropist living in the United Kingdom.

Visitors may view works by students in the master’s of fine arts program and undergraduate specialized studio program during open studio sessions in Blackwood Hall, the Firehall, and Alexander Hall.The studios will be open from 3 to 5 p.m. and from 7:30 to 9 p.m.