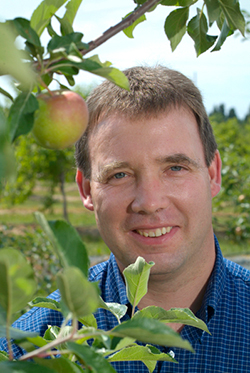 John Cline, a professor in the Department of Plant Agriculture, is leading a multi-year project to provide apple growers and cider makers with optimum varieties.

He’s looking for apple varieties suited for cider and then producing trees in a nursery. He aims to learn how to grow the trees commercially and measure fruit qualities for fermentation into cider.

Culinary (fresh) apple cultivars have been used by Ontario cider makers but are not ideal for optimizing cider flavour, Cline said. Cider varieties contain higher levels of tannins, sugar and other flavour components that make them a better hard cider product.

“There aren’t many cider varieties that are commercially available in Canada, so we had to begin our research by scouting for material from European and American sources,” said Cline.

“In the last 100 years, the Canadian apple industry has focused on fresh market and eating apples, and these varieties aren’t ideally suited to cider.”

A distinct Ontario hard cider would bring with it new potential for Ontario’s agri-food sector, he said. Read more

Cline is working with the Ontario Craft Cider Association. His research is funded by the Ontario Ministry of Agriculture, Food and Rural Affairs-University of Guelph partnership and the Growing Forward 2 Program.