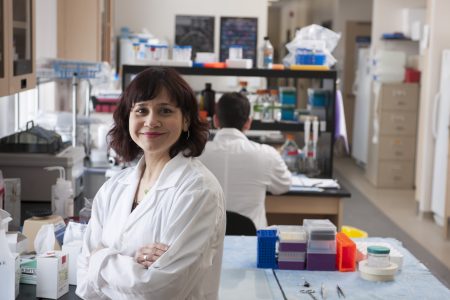 A University of Guelph professor and cancer researcher has made this year’s “Top 10” list of most influential Hispanic Canadians.

Alicia Viloria-Petit, a professor in the Department of Biomedical Sciences at the Ontario Veterinary College (OVC), was honoured Thursday during an event in Toronto.

Luis Almagro Lemes, secretary general of the Organization of American States, presented the annual awards, which are sponsored by TD Bank.

Viloria-Petit, an investigator in OVC’s Institute for Comparative Cancer Investigation, was recognized for her cancer research during the past 25 years. Her research findings have been cited more than 2,000 times.

She was the first to show that drugs known as EGFR-type kinase inhibitors indirectly inhibit the formation of new blood vessels necessary for solid tumours to grow. This influenced the clinical approval of the HER2-targeting antibody Herceptin, currently used to treat a subset of worldwide breast cancer patients. She was also the first to show the development of acquired resistance against Herceptin-like drugs, a phenomenon that was subsequently observed in patients.

In 2012, Viloria-Petit was involved in a major study of how cancer spreads. The team found that proteins produced in normal cells near a tumour affect the cancer’s ability to spread to other tissues of the body. That process of metastasis is the main cause of death from cancer.

Through current comparative studies of dogs and humans, she hopes to help speed up the discovery of new therapeutic targets for metastatic disease.

Viloria-Petit completed her bachelor’s and master’s degrees in Venezuela, and her PhD at the University of Toronto. She joined U of G in 2009.