A cookbook born out of lessons learned from the Guelph Family Health Study (GFHS) at the University of Guelph will help busy families, say the study’s researchers. 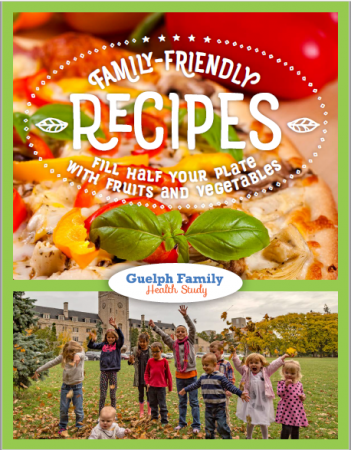 The GFHS is following families for 20 years to see whether lifestyle behaviours and strategies adopted early in life have long-term health benefits.

The study’s researchers and students have developed the first in a planned series of seasonal recipe booklets in response to requests from families in the study. Recipes were donated, including some from Half Your Plate, a group looking to help Canadians incorporate more fruits and vegetables into meals, and Canadian food personality Bonnie Stern.

A crowd-funding initiative begun in late 2015 and involving the researchers along with U of G’s Alumni Affairs and Development department proved there was interest in the cookbook, said Prof. David Ma, Human Health and Nutritional Sciences, and one of the GFHS project leaders.

“This cookbook was developed out of engagement with the community, because GFHS families wanted a resource,” he said.

“This has led to a high-quality cookbook developed by our students, giving them valuable experiential learning.”

The recipe book is available and free to download at guelphfamilyhealthstudy.com.