The number of outdoor cats in the city of Guelph is eye-raising, and these cats are more likely to be found in low-income residential areas, according to a new study from the University of Guelph.

The researchers’ study of outdoor felines appears as municipalities struggle to address issues of homeless cats, including bird deaths and nuisance complaints from residents. 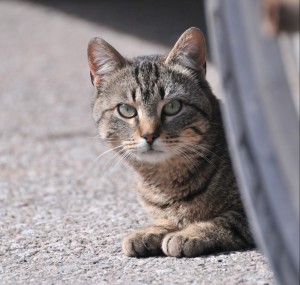 “Knowing the number of outdoor cats in our communities is the first step towards designing effective and humane management strategies for outdoor cat populations,” said co-author Prof. Jason Coe, Department of Population Medicine.

More cats live in low-income housing areas, according to the study, while fewer live around high-income commercial areas.

“This is partly due to economic reasons but also ecological factors,” said lead author Tyler Flockhart, a Liber Ero post-doctoral researcher at U of G.

“We believe there are more cats in these areas because of increased opportunities for breeding, since in lower-income areas cats are less likely to be sterilized, and they have improved access to food sources. Cats also stay away from wooded areas where there may be more predators.”

By knowing where higher numbers of cats occur, “we can geographically target humane control methods for controlling outdoor cat populations as well as compare these populations to where birds occur in our communities to figure out where the greatest impact of cats on birds is,” said co-author Prof. Ryan Norris, Department of Integrative Biology.

The researchers counted cats on city streets, paths and alleys, and estimated totals for each survey area. The approach uses information readily available in most urban areas in North America, they said.

“The study was done using techniques that are easy, quick and cheap, providing an opportunity to apply the method to any community that is interested in knowing their number of free-roaming outdoor cats,” said Flockhart.

“The hope is that we can bring together cat supporters and bird advocates to take actions to improve cat welfare and reduce the effect of outdoor cats on birds.”

The study was published in the journal Animal Conservation.