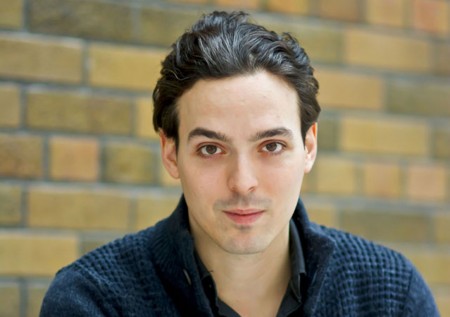 Having more than one person with CF in a room risks transferring resistant germs between them. To allow participants to interact safely, Brock and his collaborators conceived the opera as a multimedia performance, using online applications like Skype to record duets and other ensembles, and to allow participants to meet and interact.

As an undergraduate student, Brock met Eva Markvoort, a young woman with CF who became the subject of the award-winning documentary 65_RedRoses. “I found her unbelievably inspiring,” he says of Markvoort, who died in 2010.

Markvoort’s story stayed with him, and when he and composer Gareth Williams were in Glasgow, Scotland, working on a project together, they saw an opportunity to create something that could also help those with CF.

Brock and Williams wrote music for participants to sing, while specialists at Gartnavel General Hospital studied the impact of singing on the health of participants. Because CF makes breathing difficult, project researchers are exploring if classical singing techniques, including breath control and voice lessons, can improve the physical and mental well-being of cystic fibrosis patients.

Brock and Williams interviewed the CF patients and learned about the limitations of their voices and the music they wanted to sing. “We wanted them to sing for pleasure, to enjoy the experience,” says Brock. The research is ongoing and the opera was relaunched this year in Glasgow, Edinburgh and New York, with some reworking of songs to suit a more standardized performance.

“It’s like any opera with high drama and high emotions,” says Brock.

Being a playwright and librettist provides a good mix of solo work and collaboration, he adds. “The composer and I inspire each other, but there’s always that anxious part when I send my words over to see if they will work.”

Growing up, Brock lived in several different cities across Canada. He earned a degree in zoology from the University of Manitoba, and then worked in the nutritional supplements industry in Vancouver for a time.

“I wasn’t always thrilled to go to work, so I joined a community theatre group,” he says. “My partner at the time said, ‘You should find out a way to do theatre for a living — it’s what makes you happy.’”

Brock took that advice to heart. He studied creative writing at the University of Victoria before enrolling in the first cohort of the master of fine arts in creative writing program at the University of Guelph-Humber. He won the 2011 Herman Voaden Canadian National Playwriting Award and has produced several plays. In 2014, he published his first book of poetry, Everyone is CO2 (Wolsak & Wynn).

“So much of my writing deals with fragility — how we recognize fragility in ourselves and in others. And though that idea is always present in our Breath Cycle project, I’ve also learned so much about human strength,” says Brock. “Some of the most powerful singing I’ve heard in my life has come out of the mouths of the Breath Cycle singers. I love those surprises.”