A University of Guelph engineering professor working to get computers to “think” like humans has been named to a prestigious new network created by the Canadian Institute for Advanced Research (CIFAR) for researchers “pursuing answers to the most difficult challenges facing the world today.” 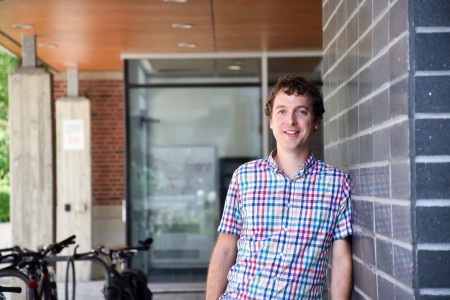 Graham Taylor is among the inaugural cohort of CIFAR Azrieli Global Scholars. He will receive $100,000 in research support and work with 18 early-career researchers from five countries for the next two years.

He’s one of two new scholars appointed to CIFAR’s international Learning in Machines and Brains program.

“This is a tremendous honour for Professor Taylor and the entire University,” said Malcolm Campbell, vice-president (research).

“CIFAR funds leading scholars so that they can pursue fundamental questions of importance to society. This prestigious appointment speaks to the excellence and impact of Graham’s research, which is helping solve problems in everything from food to the environment to neuroscience.”

Taylor is an expert in machine learning and high-performance computing. He has international research collaborators and is involved in multimillion-dollar projects backed by federal agencies.

“CIFAR has been instrumental in establishing Canada as a world-renowned centre for machine learning research,” said Taylor.

“The story of how CIFAR supported Canadian researchers through the dark days of neural networks through to their re-emergence is incredible. I am honoured to join such a forward-thinking network of researchers; they really are my role models.”

He works with musicians, computer scientists, engineers, plant and environmental scientists, and neuroscientists.

Taylor has helped develop a prototype for “smart” insect traps that identify pests, avoiding any need to send samples to experts. He is working on smart unmanned aerial vehicles for farm surveillance.

“Deep learning is one of those fields that can impact different disciplines,” he said. “Everyone is generating lots of data and everybody wants to do more with data.”

The inaugural CIFAR Azrieli Global Scholars include experts from China, Israel, Austria, Canada and the United States. Plans call for expanding the program to 40 scholars from six continents by 2018.

CIFAR was created in 1982 to bring together leading researchers to address important questions. Based in Canada, this global research organization consists of about 360 fellows, scholars and advisers from more than 100 institutions in 17 countries.