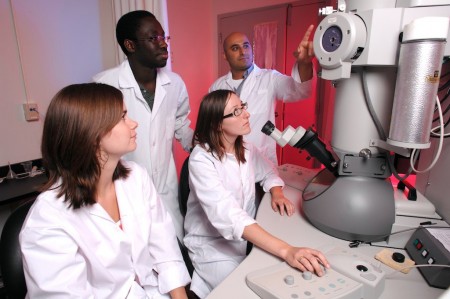 Bacteria know there’s strength in numbers — that’s why they form biofilms. These bacterial communities are more resistant to antibiotics than individual free-floating cells, thanks to a protective exterior that encases the biofilm “like a tank,” says Prof. Cezar Khursigara, Department of Molecular and Cellular Biology.

His lab is studying how Pseudomonas aeruginosa bacteria form antibiotic-resistant biofilms in the lungs of people with cystic fibrosis, causing persistent lung infections. “This is a particularly nasty pathogen in terms of hospital-acquired infections,” he says. Working together with researchers at SickKids in Toronto, they discovered factors that enhance antibiotic resistance when the bacteria form biofilms.

“The biofilm itself provides protection from antibiotics,” says Khursigara. “When they form these biofilms, they encase themselves in a sugar coating, which makes antibiotic penetration very difficult.” The bacteria also produce an enzyme that counteracts antibiotics such as penicillin.

The lab uses electron, confocal and fluorescent microscopy to analyze samples and test their response to different types of antibiotics.

Normal lungs are lined with microvilli, tiny finger-like projections that sweep pathogens, mucus and dust out of the lungs. The microvilli in cystic fibrosis patients are impaired, making their lungs susceptible to opportunistic pathogens like Pseudomonas aeruginosa. Cystic fibrosis also causes thick mucus to form in the lungs, providing an ideal habitat for bacteria. “Given the opportunity, they can colonize pretty much any environment,” says Khursigara.