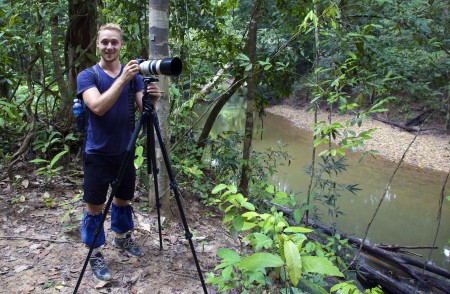 David Borish, who recently graduated from international development studies at the University of Guelph, says without intervention the tigers’ future is bleak.

“If something isn’t done within the next decade to halt the illegal trade and habitat loss, tiger populations in many countries will be at levels difficult to bounce back from,” he says. “Without significant change, there’s very little hope of them surviving.”

Borish is doing something to make that change happen. He’s created a documentary, called Tracks in a Tiger Economy, which highlights the plight of tigers in Malaysia, including their connection to the struggles of Malaysia’s indigenous people and the environmental impact of development. Borish spent five months filming during his first visit to Malaysia and several more months editing.

The film was originally scheduled for release July 29 for World Tiger Day, but debuted early when news broke internationally that 40 tiger cubs had died at a Tiger Temple in Thailand. These temples allow tourists to approach and have photos taken with the resident tigers — they have been criticized for drugging the tigers to make it safer for people to interact with them. With the latest incident there are also increased concerns about the animals being bred intensively so the tigers and their body parts can be sold on the black market.

The film was the basis of an independent study course Borish was enrolled in at U of G. He spent five months filming in Malaysia and several more months editing the film. He worked with the Malayan Conservation Alliance for Tigers, WWF-Malaysia and other organizations to produce the documentary. Malayan tigers are a recognized sub-species, and while exact numbers are unknown, they are critically endangered — there are thought to be only a few hundred of these animals left.

Borish’s film highlights the effects of deforestation — the biggest decline in Malayan tiger populations is largely due to the clearing of forested areas to produce palm oil. These forests were also home to the many hunter-gatherer and nomadic indigenous tribes, who have now been forced to move to reservation-like settlements.

Poaching is another major cause of the decrease in the tiger population. As Asian economies such as China’s have grown, so has the market for tiger bones and body parts.

Borish sees the tiger as a symbol for both conservation and sustainable development in the area.

“Malayan tigers require large expanses of forests to survive, so by protecting their habitat we are preserving the forested landscapes that are not only home to wildlife and indigenous tribes, but also provide ecological functions that are fundamental to economic success.”

The documentary has been accepted for two film festivals, and Borish has applied to several more. With this film complete, the filmmaker and photographer is turning his attention to other socioeconomic and environmental issues around the world.

Next he’ll be traveling to Nepal to produce a promotional and educational video about the use of U of G-developed sustainable agriculture kits, and next year he’ll be in Labrador working with Prof. Sherilee Harper to explore how the declining caribou population is affecting the aboriginal population.

“Humans and animals are more connected than people think,” says Borish of his work. “My goal is to highlight these connections through film and photography, so people can become more aware of complex, interconnected issues affecting all living things.”