Story by Anna Wassermann, a U of G student writer with SPARK (Students Promoting Awareness Research and Knowledge) 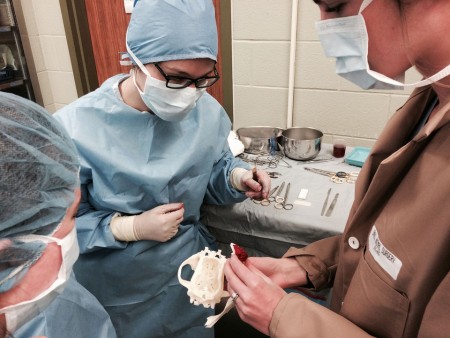 Michelle Oblak, centre, uses a custom 3-D model created at U of G’s Digital Haptic Lab to help orient herself during surgery on dog Pi.

At the Ontario Veterinary College (OVC), advanced surgical procedures for removing tumours are getting companion animals back on their paws. But sometimes tumours present themselves in odd and inaccessible locations, and innovative techniques are needed to locate and remove them.

That’s the situation that faced veterinary surgical oncologist Michelle Oblak, Department of Clinical Studies. Pi, a seven-year-old mixed-breed dog, arrived with a tumour invading his cribriform plate. That’s the part of the skull that separates the brain from the nasal cavity.

“In almost all cases I use CT imaging to plan how I’m going to remove a tumour,” says Oblak. “But in this case, the tumour was in such a strange and risky position that I needed a better, clearer way to determine whether or not I could safely remove it.”

Phillips works out of the university’s Digital Haptic Lab, run by sculptor Prof. Christian Giroux, School of Fine Art and Music. The lab is a space for researchers from the arts, engineering and sciences to come together and cross-pollinate ideas. Equipped with a 3-D printer, a water jet cutter that can slice through steel and a digital haptic device (a virtual sculpting tool that allows users to develop unique 3-D designs on a computer), the lab allows users to develop products that are impossible for traditional machinists.

The lab is affiliated with the College of Arts and supported by the Office of Research. Phillips has a medical background, too, with a PhD in the field of human shoulder mechanics.

With Pi’s surgery just three days away, Phillips got to work developing a 3-D model of his skull, including his brain cavity and tumour. Using CT images provided by Oblak, Philips used segmentation software to split the images into distinct sections, separating the brain from the tumour and the bone from the tissue.

Once Phillips could distinguish between the different parts of Pi’s skull, he used traditional engineering software to develop a computer model that he 3-D printed in plastic.

With the model in hand, Oblak was able to look at every angle of the tumour to gain a better sense of what she’d be facing once she got inside Pi’s nasal cavity. During the surgery, Oblak was able to use the model to orient herself and figure out how much tumour was still left to remove.

It’s been a few months since Pi’s surgery, and Oblak reports he is doing exceptionally well. For Pi’s family, the model helped reassure them that Oblak had a concrete plan in place to treat their pet.

Oblak says these custom 3-D models wouldn’t be possible without Phillips’ skill set and anatomy background. She says collaborating with someone who has the knowledge — not to mention someone who is easily accessible on campus — means limitless possibilities for future collaborations between the Digital Haptic Lab and OVC.

In fact, Oblak and Phillips are already looking forward to their next collaboration together. One idea is to develop custom implants for animals that have had limb-sparing surgeries, in which tumours are removed along with surrounding bone and cartilage.

The Digital Haptic Lab is funded by Canada Foundation for Innovation, the Ontario Ministry of Research and Innovation and the College of Arts.