Protecting the health and safety of people with food allergies could become easier thanks to a handy new tool created at the University of Guelph for identifying peanut and other potentially dangerous food allergens.

Diners at restaurants could immediately learn if the foods they are eating are safe, and manufacturers and food safety inspectors would also be helped with the nanotechnology. 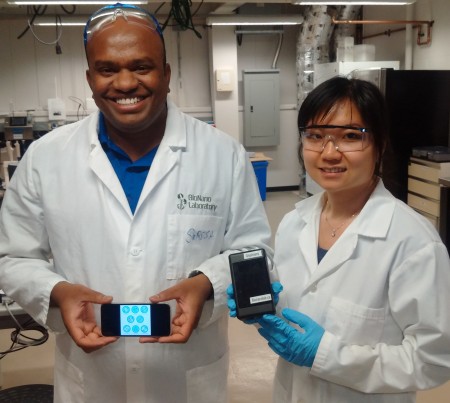 Researchers at U of G’s BioNano Laboratory have developed a portable, discrete apparatus that can identify allergens such as peanuts or gluten more quickly and cost effectively. The new detector could expedite allergen reporting and reduce the number of allergic reactions through more timely results.

The wallet-size equipment means tests can be done on location instead of having to rely on a lab that may be located far away.

The process requires a small amount of the suspected food to be liquefied in a suspension. A filter syringe is then used to inject it into a silicon-based plate developed by the researchers.

“As the sample passes through tiny tubes of the microfluidic chip, it travels through a beam of light from a LED source that is monitored by a specialized camera,” said Prof. Suresh Neethirajan, director of the BioNano Lab.

“The allergen glows and the camera is able to decipher a result in just 10 minutes. We also are developing a new app that will allow us to have results almost immediately. Typically, it would take two to three days to hear from a lab, but now, we should be able to know for certain in two to three minutes.”

In addition, since the technology uses microfluidics and nano-equipment, it requires a very small sample.

“We’re bringing down the volume of the reagents involved, making this a more environmentally friendly way of testing allergens,” said Xuan Weng, a BioNano research engineer.

With one in 10 people in the world suffering from a food allergy, the researchers see a market for the device, which they have already filed a patent for, though it will not be available on the market for a couple of years.

“This device could be used by manufacturers, food safety inspectors, restaurant owners and servers, customers, or any one concerned about food safety,” said Neethirajan.

“We’re also working on making the device capable of detecting other allergens, such as shellfish. What we’re doing is going from being reactive with allergies to actually preventing them. This device could transform the future of identifying hazardous food components.”