Fewer mass disease outbreaks and better vaccines may result from a new nanoscience-based method for identifying emerging flu viruses developed by international scientists including a University of Guelph researcher.

The team’s discovery may significantly speed up identification of flu viral strains, thwarting disease spread and leading to more reliable vaccines, according to U of G professor Suresh Neethirajan. 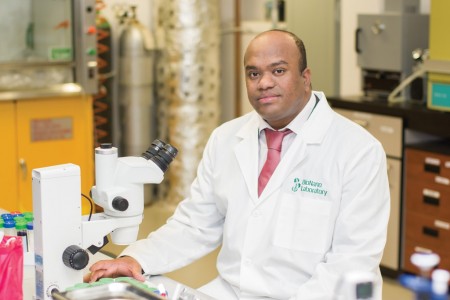 “This allows viruses to be detected early before large numbers of people get sick,” said Neethirajan, head of the BioNano Laboratory in the School of Engineering.

The discovery is described in a paper this month in Scientific Reports, published by Nature.

The flu virus affects 15 per cent of people worldwide at any given time, and costs the global economy between $71 billion and $167 billion per year, according to the World Health Organization.

In Canada, there are more than 12,000 flu-related hospitalizations each year, according to Health Canada statistics.

Unlike existing and expensive detection equipment, a portable identification kit designed by the researchers uses a simple colour change to identify viral strains from complex samples.

He said this simple, inexpensive method will allow developing nations to identify viruses rapidly and share information worldwide to stave off epidemics.

The method is not confined to detecting flu viruses, said the U of G professor.

“Food-borne viruses such as Norwalk, hepatitis and those that cause gastroenteritis can also be quickly tested for identification in areas where outbreaks are located so they can be confined and treated.”

For this project, Neethirajan worked with researchers in Japan and Korea.

Besides its potential use in hospitals and clinics, he said, the method may also help to detect food-borne viruses.

They have also designed a portable device to detect trace allergens such as peanuts, and have developed “smart surfaces” to prevent contamination in the food industry.