A new study by University of Guelph biologists has brought researchers closer to the goal of restoring American elms resistant to Dutch elm disease (DED) in cities and forests across Canada and the United States. 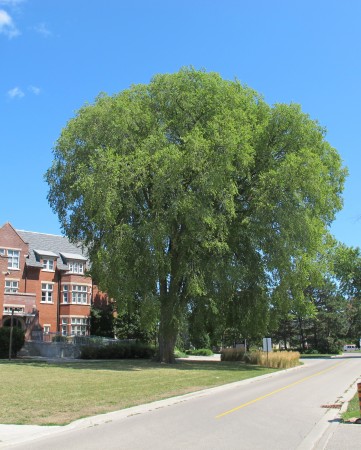 “There’s nothing as beautiful as an American elm in landscaping,” said Saxena, director of U of G’s Gosling Research Institute for Plant Preservation (GRIPP).

A fungal infection carried by beetles, Dutch elm disease all but wiped out elm trees across this continent during the past century.

“This study is the first to compare the resistance and susceptibility of trees to Dutch elm disease at the genetic level,” said U of G post-doc researcher Sherif Sherif, lead author of the new paper.

Research associate Mukund Shukla said he hopes the team’s work will point to ways to clone resistant trees for replanting forests and cities.

Other co-authors at the University of British Columbia and Laval University analyzed fungal-tree interactions.

After injecting the DED fungus into tolerant and susceptible elm saplings, the researchers examined tissue to see which genes were expressed.

Other researchers have identified almost two dozen genes likely involved in protecting the tree in tolerant specimens, but scientists know little about how those genes work, said Saxena.

The researchers found that molecular events within the first four days after infection are critical, and occur differently in resistant and susceptible trees.

They also looked at treating tissue with plant hormones that help protect against Dutch elm disease.

Their work might allow plant breeders and biotechnologists to use these defensive genes as markers for screening elms likely to stand up to the disease.

“This study has given us a tool to detect potentially tolerant varieties,” said Saxena.

It might also help in treating insect and fungal blights in other tree species, said Sherif. “Other shade and forestry trees are infected by fungi in a fashion similar to Dutch elm disease.”

GRIPP scientists have developed and refined simple and reliable methods for cloning elms from single cells.

Established in 2011 with funding from Susan and Philip Gosling, the institute runs a cryopreservation facility for cloning and banking endangered plant species.