University of Guelph scientists working to improve cancer therapy for dogs — and potentially to enhance human cancer treatment — have received a $100,000 grant from Ontario Centres of Excellence (OCE). 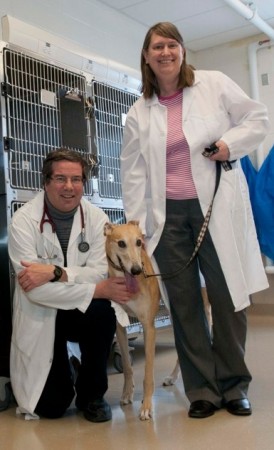 Principal investigator is Brenda Coomber, a biomedical sciences professor in the Ontario Veterinary College (OVC) and co-director of U of G’s Institute for Comparative Cancer Investigation (ICCI).

She will work with Rna Diagnostics to study dogs with advanced lymphoma, one of the most prevalent canine cancers. This project builds on her research begun in 2013 with the Toronto-based company.

“Ultimately, our goal is to ensure that all dogs with lymphoma get the best treatments we have available,” Coomber said.

“Since lymphoma in dogs is very similar to lymphoma in humans, the results of this study may also improve our understanding and treatment of human cancer.”

Typically, treating canine lymphoma with chemotherapy involves multiple rounds of four drugs. In about four out of five dogs, this treatment leads to complete cancer remission.

But about half of dogs with complete remission will suffer a relapse within six months and will need new treatment.

“This time we’ll be studying dogs that have lymphoma and did not respond to treatment, or those who responded and were in remission but have now relapsed,” Coomber said.

Learning whether RDA™ can predict early response to chemotherapy among dogs with advanced lymphoma might spare patients from ineffective drug treatments and improve outcomes, she said.

Coomber will also analyze genes in these samples to identify other changes that might predict response to therapy for advanced canine lymphoma.

The OCE funding comes from its Voucher for Innovation and Productivity II fund, which supports collaborations between universities and Ontario companies.

“This is the kind of made-in-Ontario innovation we are always trying to find and are proud to support,” said OCE president and CEO Tom Corr.

“The work that Brenda Coomber and Rna Diagnostics are doing has the potential to not only change the way dogs are treated for lymphoma but also provide valuable information that might lead to more effective treatment of the disease in humans.”

Ken Pritzker, CEO of Rna Diagnostics, added: “OCE is a valued supporter. Funding needed studies ensures we get RDA to those clinicians and patients who need it most.”