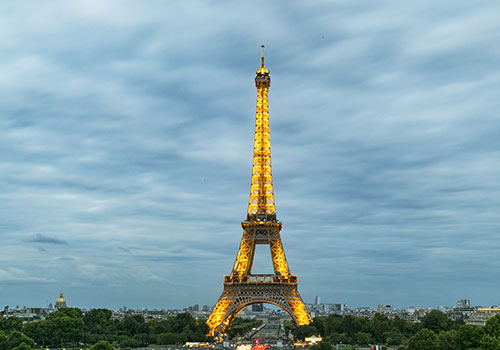 On the night of the Paris terror attacks Nov. 13, Dawn Cornelio was leaving an author reading in the French capital.

For the U of G French studies professor, the first clue about the events unfolding that evening came during the walk back to her apartment, when her husband began texting from the United Kingdom to ask if she was OK.

The attacks by gunmen and suicide bombers at a soccer stadium, a concert venue and several restaurants around Paris killed at least 129 people and injured hundreds more. It was the worst terror attack in France since the Second World War.

Cornelio had arrived in France a week earlier for a month-long research project on contemporary French author Chloé Delaume.

That night’s reading took place near the Georges-Pompidou Centre, about seven minutes’ drive from Le Bataclan music hall where gunmen opened fire and 10 minutes from one of the restaurants where the attackers struck.

In an email from Paris early this week, Cornelio said she noticed nothing out of the ordinary in her neighbourhood, but was more vigilant than usual on the 20-minute walk home. That night, she followed the news on TV and messaged family and friends, including Guelph master’s student Erin Budra, also currently in Paris for a separate research project.

“Erin and I began to text each other as well, keeping each other company through the first hours as the news began to come in,” says Cornelio. “This is how the next few hours went until I fell asleep shivering from adrenaline at about 5 a.m.”

Cornelio had planned to attend more literary readings on the weekend, but they were cancelled. She spent Saturday indoors watching the news. Sunday she went out to visit the Luxembourg Garden. The garden was closed because of the attacks, but she sat and read in a park next door.

Budra was watching a movie at home Friday evening when a friend messaged her from Canada to ask how she was.

“The first thing I did when I knew something was going on was call my parents to reassure them that I was okay,” Budra says. “After that I sat glued to the news. I don’t know what time I finally fell asleep, but it was well after 4 a.m. It was definitely one of the longest nights of my life.” 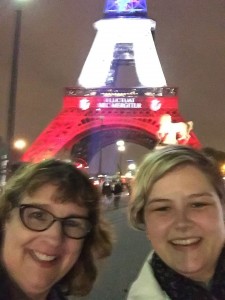 Prof. Dawn Cornelio, left, and master’s student Erin Budra at the Eiffel Tower, lit up in red, white and blue, a few days after the attacks.

Her apartment is just over a kilometre from the Bataclan music hall. “There is a fire station very close to my apartment, so I heard sirens almost constantly all of Friday night.” By Monday, she says, fewer people than usual were on the streets and many stores were closed.

Researching a master’s thesis in European studies, Budra arrived in Paris at the beginning of September. Enrolled in U of G’s School of Languages and Literatures (SOLAL), she’s studying the role of women in the French resistance during the Second World War.

She says many Parisians and politicians “have begun using terms like ‘resistance’ in relation to these attacks — language that hasn’t been used in France since the Second World War and the Algerian War.”

Budra’s thesis adviser is Margot Irvine, SOLAL’s acting director and a professor in French and European studies. Returning home to Toronto Friday evening, she was stuck in traffic when news of the attacks came on the radio.

She spent two hours en route “worried because I knew my colleague Dawn was there and my student Erin was there, so I have a great sense of responsibility.”

During a Skype call Sunday, she and Budra spent time discussing the weekend events.

Irvine spent a research year in Paris in 2011-12. She studies 19th-century culture and literature, and knows the Bataclan concert venue, built in the 1800s as a dance hall.

Referring to the terrorists, she says, “It’s very sad to see the sites they chose. Seeing the lists of people who are deceased, I found very moving and difficult to read, people in their 40s and under, young professionals.”

Irvine plans to visit Paris for a conference next spring. “I’m very happy to return. It’s such a stimulating city, such a cultural centre, I wouldn’t want to shy away from that.”

Adds Cornelio: “I am encouraged to see so many people, Parisians and tourists alike, trying to keep life normal. France is irrevocably changed but steadfastly the same.”