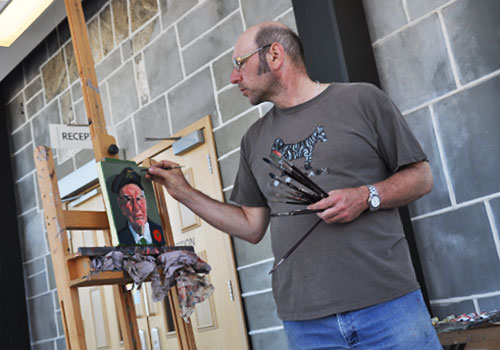 At 93, World War Two veteran Earl Setter still remembers when a shell exploded near him and sent him flying. “The concussion blew me against the side of the trench,” he says as he sits motionless while artist Greg Denton paints his portrait at the Guelph Civic Museum.

Setter is one of 100 people Denton painted as part of a series called “100 Portraits/100 Poppies — Sitting in Remembrance.” The subjects included veterans, military personnel and cadets as well as those who have been affected by war.

In honour of the 100th anniversary of John McCrae’s poem, In Flanders Field, the City of Guelph commissioned an artist in residence to capture the theme of remembrance using art.

“The city awarded the project to Greg based on his strong reputation as an artist, his relatable and engaging idea for the project, and his vast portraiture experience,” says Jen Rafter, cultural program and event co-ordinator, City of Guelph.

Denton graduated with an MFA from Guelph in 1996 and has been teaching art as a sessional instructor at U of G for the past 16 years. He previously painted 400 portraits of Guelph residents for the city’s 175th anniversary.

For the poppy portraits, he sent letters asking for volunteers to military organizations, seniors’ centres and churches. It took only two weeks for him to recruit 100 people.

For Denton, the portraits are part of a larger vision. “I’m essentially making a field of poppies,” he says, explaining that each person is wearing a poppy and each portrait has a green background. When mounted on a white wall, the white in between the portraits symbolizes crosses.

He painted each portrait in front of passersby in public spaces, including the Guelph Civic Museum, Guelph City Hall and the Guelph Public Library.

Preferring to work with his back to his subject, Denton says this allows the subject to watching him paint and become part of the process.

“It’s important to me that the sitter is watching the painting,” he says. “It gives them that engagement to it and makes it interactive. They respond to what you’re doing as they watch the painting process. It gives them an investment in the process, and they feel as if they’re contributing in a way that’s much more participatory. It benefits me and it benefits them.”

The portraits will be on display at the Ashlar Gallery in the Boarding House Arts Building, located at 6 Dublin St., S. (the former Civic Museum) in Guelph, until the end of November.