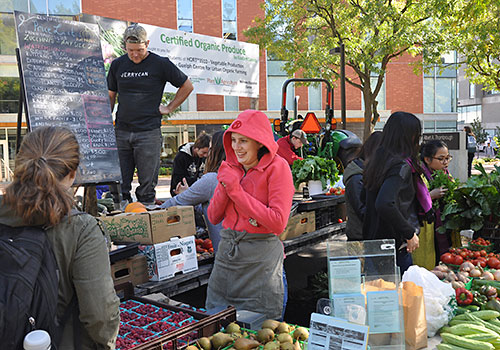 If you’re looking for locally-grown food, you don’t need to step off campus. The Guelph Centre for Urban Organic Farming (GCUOF), located on the east side of campus, hosts a weekly farmer’s market on Thursdays from 3 to 6 p.m. in front of the Richards Building. Many of the fruits and vegetables sold at the market were harvested just a few hours or days earlier.

That’s where Heather Gilmore, a third-year classics student, picked up a bunch of lemon basil. “It’s an easy way to get vegetables without going all the way to the store,” she says of the market. She also liked that the students who work at the market gave her ideas on how to use lemon basil, such as hanging it upside down to dry out and prepare as a tea.

“There’s a lot of food on the farm right now,” says Martha Gay Scroggins, who manages the farm and teaches agricultural courses at U of G as a sessional lecturer. “We want to feed people and give them access to better food.” All of the produce is grown without pesticides or herbicides.

Also working on the farm is Patrick Kelly, who was hired by the GCUOF as its first full-time farmer in March. “I don’t think I could run the farm without him,” says Scroggins.

Kelly studied biological science at U of G. “I like the self-sufficiency of it,” he says of working on the farm. “I like being a primary producer.” He also enjoys teaching students about where their food comes from, how it’s grown and why it’s important to support local food.

New to the farmer’s market this year is a partnership with U of G’s Wellness Centre, which purchased 300 reusable bags, filled them with produce purchased from the farm and gave them away to incoming students during Orientation Week in September.

Students taking “Horticulture 3510: Vegetable Production,” taught by Scroggins, work on the farm and learn how to tend and harvest crops. Some of them also work at the farmer’s market, where they help customers decide what to buy and how to prepare it. Recipe cards are available for free, featuring meal ideas such as fettuccine with Parmesan and Swiss chard, braised leeks and roasted garlic.

Fall favourites such as pumpkins and squash are abundant now, as are peppers and zucchini. Less than perfect produce is on sale at a discount, offering students an affordable option for healthy food.

Julie Trus, a first-year environmental sciences student who works on the farm, hopes that customers gain a better understanding of why organic produce often costs more than produce treated with herbicides and pesticides. It takes more time and effort to grow fruits and vegetables without the use of chemicals. Weeds are picked by hand, she explains, and crops are grown on a rotational basis so that any pests in the soil don’t affect subsequent crops.

“If you can appreciate the work that goes into it, you’re more willing to spend more on organic food,” she says. “You have to work with the environment as opposed to trying to control it.”