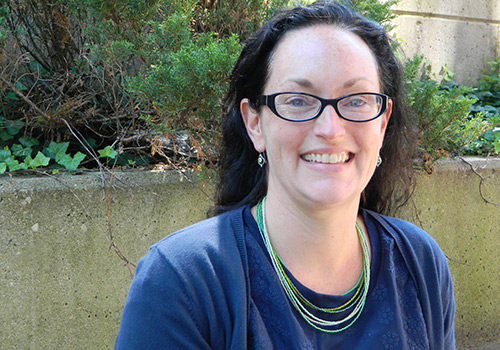 Some pregnant women develop a condition known as gestational diabetes. Although it’s usually temporary, those who’ve had it face a higher risk of developing type 2 diabetes later in life. For some new mothers, their blood sugar levels remain high even after their babies are born.

For the average Canadian woman, the risk of developing gestational diabetes is between two and three per cent. For First Nations women, the risk can be as high as 18 per cent.

“Many of the indigenous women in Canada fall through the cracks in terms of medical care,” says Hannah Tait Neufeld, a new professor in the Department of Family Relations and Applied Nutrition. “They may not go back after the baby is born for further testing. Many had gestational diabetes over three or four pregnancies, and their blood sugar levels were out of control.”

Tait Neufeld studied these issues while working on her master’s and PhD in community health sciences at the University of Manitoba. “My first study was looking at dietary changes over two generations of First Nation mothers. The grandmothers grew up in log cabins with woodstoves and no running water, but they planted gardens, knew how to find wild foods and raised their own animals for meat. The younger women ate primarily marketed foods and fast food, and no longer had the same depth of knowledge about gardening and harvesting wild foods.”

At U of G, Tait Neufeld is building on her work with the Southwest Ontario Aboriginal Health Access Centre to help ensure traditional knowledge about food is more available to families on and off reserve. “A lot of the knowledge is in danger of being lost,” she says. She is also interested in maternal and child health and indigenous food systems around the world.

Tait Neufeld brings a wealth of experience to her international research. She worked for the Mennonite Central Committee in northeastern Brazil, where she helped set up health posts that provided nutrition education for women and children, created community gardens and facilitated workshops on the revitalization of traditional plant medicines.

When she returned to Canada, she worked for the Food Bank of Waterloo for a year before taking another position with the Mennonite Central Committee in central Java. “My husband and I taught at one of the universities in Yogyakarta, and worked with NGOs on traditional medicines and agricultural projects.” Her growing interest in nutrition and community work with indigenous communities led her to the University of Manitoba.

After completing her master’s and PhD, Tait Neufeld was hired by the World Health Organization (WHO) to work in Geneva, Switzerland, for two years. Among her projects, she helped develop a website called eLENA (electronic Library of Evidence for Nutrition Actions), which provides information in six languages summarizing the evidence informing global guidelines and policy recommendations. In 2013, she returned to Ontario and was awarded a Banting Postdoctoral Fellowship at Western University, where she worked in the Indigenous Health Lab and continued consulting for WHO.

“As you might guess, I love to travel,” Tait Neufeld adds. “I’m hoping to get back to Indonesia, where they are doing some very positive and innovative work to revive and preserve indigenous knowledge.”