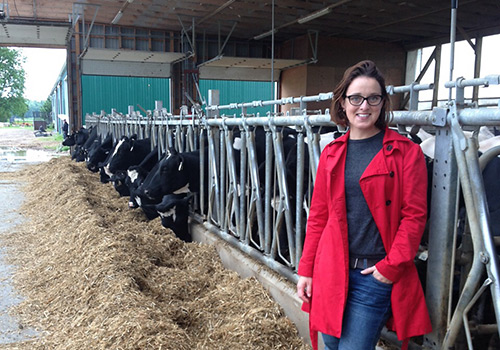 For hundreds of years, farmers have been breeding animals for the traits they find most desirable such as faster weight gain or increased milk production. Today, we can use new technology and our growing understanding of genetics to identify the actual genes that promote these traits.

Baes says there is now technology that uses hair, saliva or tissue samples to find a single nucleotide polymorphism (SNP) — a variation in a single letter of the DNA. Laboratory analysis identifies information on which variant an animal has, and can be used to help breeders select the next generation of animals. This is becoming routine in Canada, but SNPs are not the only kind of genetic variation — sometimes there are multiple copies, or insertions and deletions in the DNA, which may also have significant effects. Baes’ research compares entire gene sequences to those of a reference cow to identify variations and to find out how they affect the phenotype of the animals.

The dairy research community is building databases to connect biological observations with the genetic information Baes and other researchers uncover. “These will help us quantify the effects of the genes,” says Baes. “There may be thousand of genes involved in some traits, and only one or two in others.”

Baes is also beginning work on the genetics of feed efficiency and methane emission as part of a large international project expected to last four years. The methane gas burped out by cows is a significant environmental hazard; it’s also known that some cows use their feed more efficiently, producing less methane than others. New technologies are making it easier to measure the amount of methane produced by each cow, so genetic pathways can be identified to reduce it.

Dairy cows were part of Baes’ childhood: she grew up on a dairy farm near Stratford, Ont. During her undergraduate studies at U of G, she travelled for a semester abroad in Russia and then completed her undergrad studies, along with her master’s and PhD degrees, in Germany. Her PhD focused on the genetics related to mastitis (an infection of the udder) in dairy cows.

Soon after graduation, Baes began working with a veterinarian who was starting a breeding farm for German warmblood horses. “We started off with 40 hectares and no horses, and by the time I left 18 months later, we had 140 horses, some of which were competing internationally,” she says. “It was a great experience, but I wanted to get back to science and research.”

She left to work on a project in Switzerland studying the genetics of boar taint. Boar taint is an unpleasant smell in the fat of some mature male pigs that appears when the meat is cooked; it’s the reason that male piglets intended to be eaten are castrated in most countries. The European Union has voluntarily agreed to stop castrating by 2018 and the U.K. has already stopped. Baes says the work by her team will help breeding strategies and cut the percentage of pigs with boar taint in half over the next seven to 10 years.