Last week, the Truth and Reconciliation Commission released its preliminary report about past injustices at Canada’s residential schools. Mending relations between the country and its Aboriginal Peoples was a theme underlying much of the commission’s report and its recommendations.

And that’s an idea that resonates with three U of G scientists whose work with First Nations groups in Ontario aims to bridge indigenous and non-indigenous knowledge. 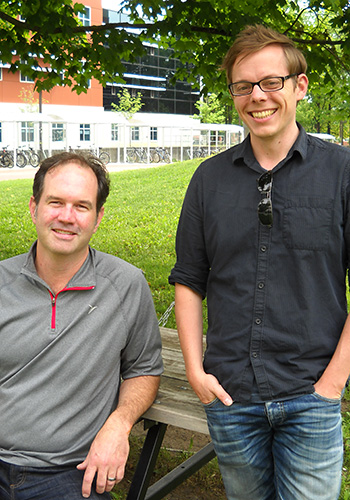 The positions of all three faculty members — spanning three Guelph colleges — are supported almost equally by U of G and by funding from the Saugeen Ojibway Nations (SON) based on the Bruce Peninsula.

Their work is intended to help in resource management and environmental assessments of proposed development projects in an area of southern Ontario between Lake Huron and Georgian Bay.

Draw a line from Goderich on Lake Huron eastward to Arthur (just north of Guelph) and then on to Collingwood on Georgian Bay. Everything north of that line up to Tobermory is part of the territory shared by SON, made up of the Chippewas of Nawash and Saugeen First Nations.

Working with both First Nations, Rooney provides expertise for environmental assessments of developments proposed within SON lands. That might include anything from landfills and waste-water treatment plants to wind farms and dredging operations.

Besides looking at individual projects, he studies cumulative effects of various developments on ecosystems within SON’s traditional territory.

As well as working with Rooney, Gillis creates computer models to help the First Nations and the Ontario Ministry of Natural Resources to set and assess catch limits for whitefish in Lake Huron and Georgian Bay.

“We’re evaluating methods already used by the Saugeen Ojibway Nation and the Ministry of Natural Resources to assess risk,” says Gillis. Without the Guelph team’s work, he adds, “they don’t know whether their methods are right.”

Based on this project, he’s now developing a related mobile app to allow fishers to record and share catch data electronically as a faster and less cumbersome alternative to manual recording.

SON funding for Rooney began in 2009 and for Gillis in 2011. Rooney’s funding was renewed for another five years in 2014.

In 2005, SON began funding work by Crawford in assessing sustainable fisheries in Lake Huron and Georgian Bay. Before joining their respective schools at U of G, both Rooney and Gillis worked with him as post-doc researchers on fisheries, habitat management and environmental assessment.

Anthony Chegahno, chief of Chippewas of Nawash Unceded First Nation says Crawford’s research has helped in setting annual harvest levels. He says the Guelph biologist “has provided advice to SON regarding the sustainability of the fishery based on sound and transparent science.”

Under a grant from the Social Sciences and Humanities Research Council, Crawford and Prof. Jeji Varghese, Sociology and Anthropology, have studied aboriginal and western science knowledge systems.

“That work has involved detailed comparison of both systems – essential in meeting the Crown’s duty to consult,” says Crawford.

Knowing more about differences and similarities between those knowledge systems will help First Nations groups and government to co-manage natural resources and, ideally, help to resolve or prevent disputes, he says. “First Nations want to be prepared to enter discussions.”

Serge Desmarais, interim provost and vice-president (academic), has helped lead the University’s work with SON representatives for about a decade. He says both First Nations groups were drawn by the University’s strengths in life sciences and environmental sciences.

Desmarais hopes to establish an academic program in aboriginal resource management at Guelph. He says such a program would mesh with recommendations of the Truth and Reconciliation Commission intended to improve relations between indigenous and non-indigenous citizens in Canada. It would also allow Guelph to further strengthen its partnership with First Nations in the Bruce Peninsula. “We already have the engagement with the communities on matters of science by virtue of these co-sponsored positions.”

Bridging indigenous and western science knowledge systems is the topic of a symposium June 9 organized at U of G by Crawford and Varghese. The event, called “Engagement of Indigenous and Western Science Knowledge Systems,” will bring more than 400 people to campus, including representatives of First Nations, government, industry, NGOs and universities.