A University of Guelph geography professor teaching global food security in novel ways has received a prestigious research award from the Pierre Elliott Trudeau Foundation, it was announced today.

Evan Fraser will receive one of three 2014 Trudeau Fellowships, worth $225,000 over three years. He is the first U of G professor to receive the honour.

“This is an important accolade for Evan and the entire University community,” said Serge Desmarais, acting provost and vice-president (academic). 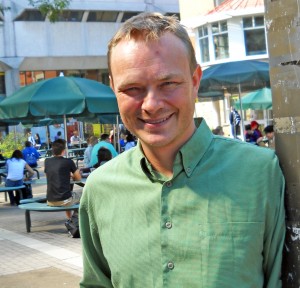 “Trudeau fellows are recognized for their research, creativity and commitment to making a difference, which defines Evan. He has dedicated himself to raising awareness and finding solutions to the global challenge of feeding the world, using new ways of thinking and approaches to share his knowledge and draw attention to problems and concepts.

Fraser’s award was announced on the same day that he was inducted into a new college of the Royal Society of Canada created to recognize emerging intellectual leaders. Says Desmarais: “It speaks highly of Evan’s reputation and to the contribution he is making in Canada and beyond.”

Nominated by their peers and selected by an independent jury of researchers and scholars, Trudeau fellows are appointed for life. The award recognizes leadership, productivity, innovation and communication on complex issues.

“The 2014 Trudeau fellowships will give some of Canada’s most innovative and committed public intellectuals time, financial support and access to a deep network, so that they can further their vision of a safer, more secure and more equitable world,” said Morris Rosenberg, president and CEO of the Foundation.

Fraser joined U of G in 2010 as a geography professor and Canada Research Chair in Global Human Security. He has raised awareness of the social and environmental consequences of food price volatility and sought ways to reduce waste in global food systems. He co-authored the book Empires of Food: Feast, Famine and the Rise and Fall of Civilizations.

Most recently, he created “Feeding Nine Billion,” a project intended to spark discussion through social media about feeding the Earth’s ballooning human population.

He plans to use his Trudeau fellowship and his connections to Canadian businesses and organizations to inform public policy.

His first project will be a graphic novel on food security. “One of the major inspirations for this story comes from the food crisis of 2008-2012,” he said, including stories of often-violent reactions worldwide to food price increases during that period.

In a news release, the Trudeau Foundation said Fraser’s work is at the forefront of its four key themes: human rights and dignity; responsible citizenship; Canada in the world; and people and their natural environment.

Fraser will discuss his project on Thursday in Montreal during a reception at the Trudeau Foundation.

“This is recognition that academics can be rewarded when they try and communicate with groups outside of traditional academic disciplines,” he said.

“I firmly believe that all academics, but especially people who have high-profile appointments such as Trudeau Fellowships, have an obligation to devote significant effort to communicating with non-academic audiences. This means not only writing for non-academic audiences, speaking to community groups and being interviewed by the media but also engaging with social media sources.”

As a Trudeau fellow, Fraser will also communicate his ideas and research through speaking engagements and by participating in the Foundation’s Public Interaction Program. Getting out the message about global food security and safety is paramount, he said.

“At a time when population growth and climate change are making food supply increasingly precarious, maintaining global food security is one of humanity’s greatest challenges.”