By fitting bumblebees with tiny radio frequency tags, a University of Guelph researcher has shown that long-term exposure to a neonicotinoid pesticide hampers bees’ ability to forage for pollen.

The research by Nigel Raine, a professor in Guelph’s School of Environmental Sciences, and Richard Gill of Imperial College London was published today in the British Ecological Society’s journal Functional Ecology. 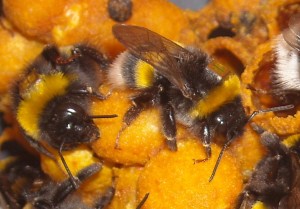 “Bees have to learn many things about their environment, including how to collect pollen from flowers,” said Raine, who holds the Rebanks Family Chair in Pollinator Conservation, a Canadian first.

“Exposure to this neonicotinoid pesticide seems to prevent bees from being able to learn these essential skills.”

The researchers monitored bee activity using radio frequency identification (RFID) tags similar to those used by courier firms to track parcels. They tracked when individual bees left and returned to the colony, how much pollen they collected and from which flowers.

Neonicotinoid-treated colonies even sent out more foragers to try to compensate for lack of pollen from individual bees.

Besides collecting less pollen, said Raine, “the flower preferences of neonicotinoid-exposed bees were different to those of foraging bees from untreated colonies.”

Raine and Gill studied the effects of two pesticides – imidacloprid, one of three neonicotinoid pesticides currently banned for use on crops attractive to bees by the European Commission, and pyrethroid  (lambda cyhalothrin) – used alone or together, on the behaviour of individual bumblebees from 40 colonies over four weeks.

“Although pesticide exposure has been implicated as a possible cause for bee decline, until now we had limited understanding of the risk these chemicals pose, especially how it affects natural foraging behaviour,” Raine said.

Neonicotinoids make up about 30 per cent of the global pesticide market. Plants grown from neonicotinoid-treated seed have the pesticide in all their tissues, including the nectar and pollen.

“If pesticides are affecting the normal behaviour of individual bees, this could have serious knock-on consequences for the growth and survival of colonies,” explained Raine.

The researchers suggest reform of pesticide regulations, including adding bumblebees and solitary bees to risk assessments that currently cover only honeybees.

“Bumblebees may be much more sensitive to pesticide impacts as their colonies contain a few hundred workers at most, compared to tens of thousands in a honeybee colony,” Raine said.