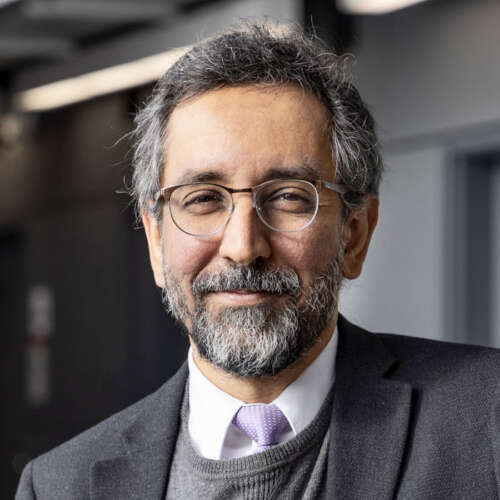 The University of Guelph has named Mazyar Fallah as its new dean of the College of Biological Science (CBS). Currently associate dean, research and innovation, in the Faculty of Health at York University, Fallah will begin a five-year term Jan. 1, 2021.

The announcement was made today by Gwen Chapman, provost and vice-president (academic), who chaired the search committee.

“Professor Fallah is an energetic and visionary leader, and I am delighted he will be joining U of G,” Chapman said.

“He has an extensive track record of strategic leadership at York University, holding senior positions relating to teaching, research and administration. He has great enthusiasm for the College of Biological Science and a clear vision of how to best position it for continued excellence and future growth.”

He is an excellent researcher, with a strong track record in the neural control of movement and neuroscience, she said.

“As well, Mazyar has a strong, demonstrated commitment to equity, diversity and inclusion, and has made significant contributions in this area at his current university. He will bring this wealth of knowledge and experience to U of G and will be an excellent addition to the leadership team and University community.”

In making today’s announcement, Chapman thanked Prof. Glen Van Der Kraak, who has served as interim CBS dean since August 2019. “Glen’s experience and dedication were tremendous assets to the college and University during this time of transition,” she said. Van Der Kraak will continue in the position until Jan. 1; he will then help with the leadership transition for two months before taking an administrative leave.

Fallah joined York in 2005 as a professor in the School of Kinesiology and Health and has served as associate dean of the Faculty of Health since 2015.

At York, he oversaw vision and implementation plans, strategic research plans and numerous initiatives for intensification and enhancement of research. He also initiated and led efforts in faculty support, development and mentoring.

He has led numerous submissions to funding agencies, including the Canada Foundation for Innovation, the Canada First Research Excellence Fund, the Canadian Institutes of Health Research and the Natural Sciences and Engineering Research Council.

“‘I am very excited to join the outstanding and vibrant community of the College of Biological Science,” Fallah said.

“I look forward to working with colleagues in the college, as well as across the University, to further advance its leadership in innovative biological research, scholarship and experiential education.”

Fallah earned his BA in biology from Johns Hopkins University and an MA in psychology and PhD in psychology and neuroscience from Princeton University. He was  a post-doctoral researcher in the Systems Neurobiology Laboratory at the Salk Institute for Biological Studies in La Jolla, Calif.

He studies the neurophysiology of cognitive processes, has secured millions of dollars in external research funding and has authored numerous scientific publications.