Drawing attention to Earth’s crisis of groundwater contamination and exploitation is the goal of a University of Guelph engineering professor whose prestigious international water award was announced today.

Prof. John Cherry, an adjunct professor in U of G’s School of Engineering, was named the 2020 winner of the Stockholm Water Prize on UN World Water Day on March 22.

He’s the first hydrogeologist and the second Canadian to win the international award, which has gone to academics and organizations worldwide, including the International Water Management Institute in Sri Lanka and Great Britain’s Water Aid.

Awarded annually since 1991, the prize honours individuals and organizations whose work helps to conserve and protect water resources. Cherry will receive the award from Princess Victoria of Sweden in late August and will address the opening session of this year’s World Water Week conference to be held by the Stockholm International Water Institute.

“John has made incredible contributions to groundwater research that have had profoundly important global impacts, aligning perfectly with our institutional commitment to improve life,” said Malcolm Campbell, vice-president (research), at U of G.

“John’s achievements are spectacular and provide inspiration for the University of Guelph research enterprise, and we offer him our heartfelt congratulations and praise. John is most deserving of this award.”

Cherry plans to use the award to highlight what he calls “the global groundwater crisis.”

Worldwide, groundwater quality is imperiled by pollutants, especially contaminants from agriculture such as fertilizer and other sources such as road salting, septic systems and industrial chemicals, said Cherry.

Nearly all of Earth’s liquid freshwater is groundwater, including reserves that provide drinking water for about one in three Canadians. Almost half of the world population depends on groundwater for domestic use and many rely on it for irrigation.

“Groundwater as an issue gets ignored in Canada and in many other countries,” said Cherry, who studied groundwater contamination for decades as a professor at the University of Waterloo. “It’s going on underground, so you can’t see it, but it’s the backbone of the freshwater cycle.” 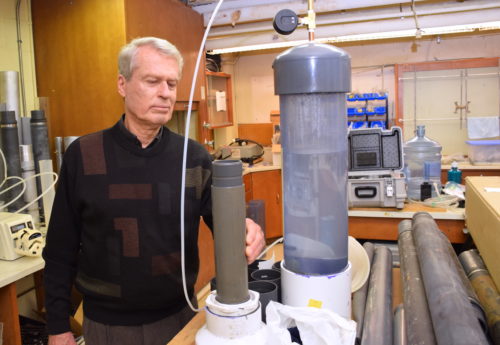 This summer, he will launch the Groundwater Project, a series of e-books and other educational resources to be made available free online in several languages for users from water experts to university students to schoolchildren. Cherry has solicited chapters from hundreds of water experts worldwide, including U of G engineering professors Beth Parker and Ed McBean, and Prof. Aaron Berg, Department of Geography, Environment and Geomatics.

The project will be based at U of G, where Cherry is principal investigator with the G360 Institute for Groundwater Research. Led by Parker, the institute studies groundwater quality and interactions between groundwater and surface water. It specializes in developing and applying sophisticated groundwater monitoring technologies, including systems monitoring the bedrock aquifer in Guelph and Wellington County.

“What’s most notable to me about Professor Cherry is his extraordinary capacity for collaboration, likely due to his broad interest in people and their ideas and his passion for seeking solutions to real-world problems,” said Parker. Referring to her colleague’s longtime teamwork in hydrogeology research and education, she said, “He is still pursuing advances with groundwater science and practice with his vision and with the largest-ever team working on the groundwater e-book project, which will undoubtedly have global impact.”

The project grew out of a definitive textbook called Groundwater, co-authored by Cherry in 1979.

Called a “pioneer of contaminant hydrogeology,” he joined the University of Manitoba in 1967 as Canada’s first groundwater professor.

Cherry has been named a Fellow of the Royal Society of Canada and a Foreign Fellow of the American Academy of Engineering. In 2016, he received the Lee Kuan Yew Water Prize from Singapore for outstanding contributions to global water research.

He traces his longtime interest in water resources to the work of his parents, Lawrence Cherry and Evelyn Spice Cherry, who experienced drought while growing up in Canada’s West. Both worked for the National Film Board and later ran a Saskatchewan documentary film company specializing in social and environmental issues.