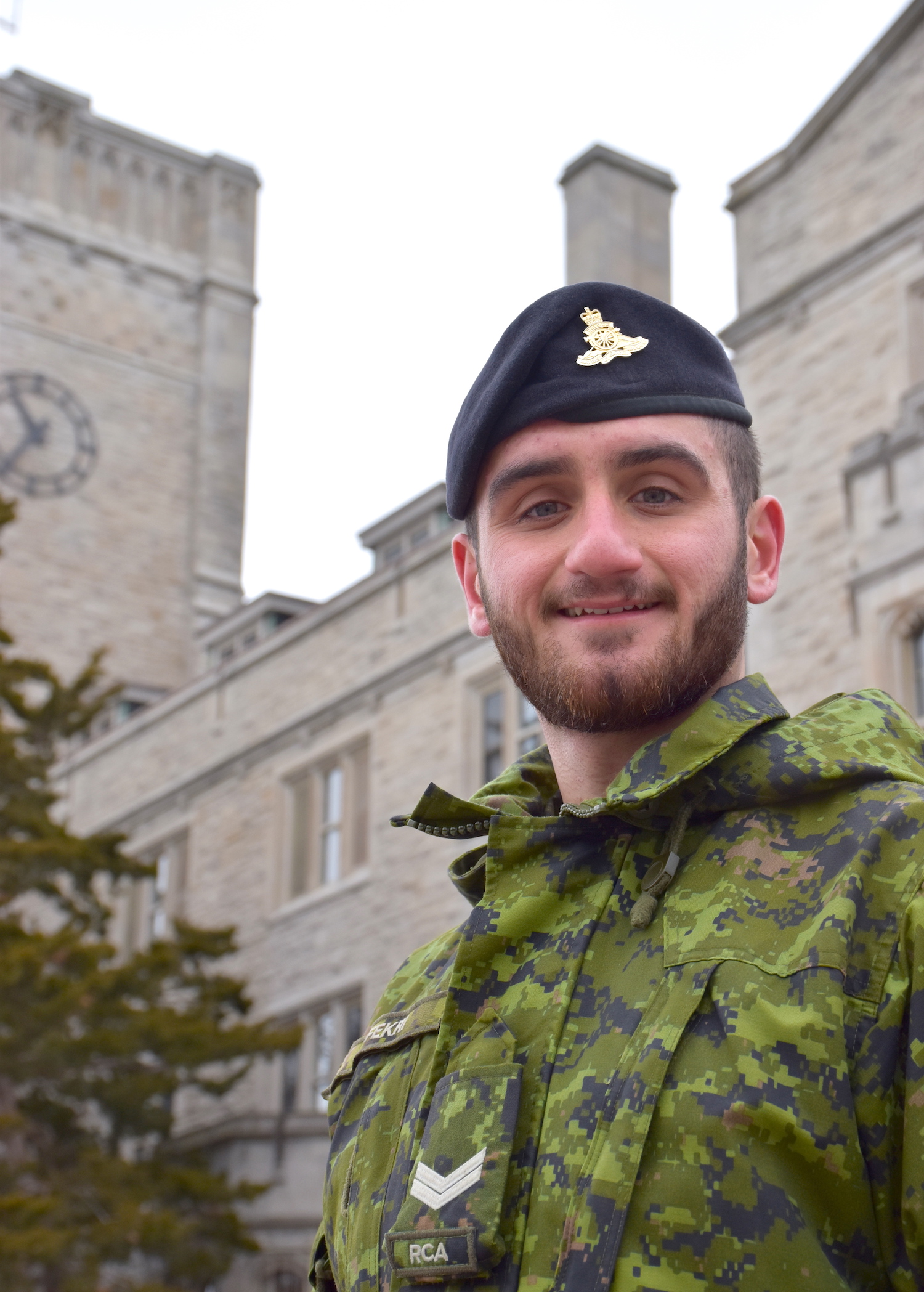 U of G student-reservist Alex Fekri

Bringing peace of mind to University of Guelph students serving in the Canadian Forces is the aim of a proposal that would offer these students academic accommodations.

The Serving Scholars initiative will be the first of its kind in Ontario and unique in its focus on reservists.

There are at least 30 U of G students who are members of the reserves, and most try to balance their studies alongside their military duties. But they can run into scheduling conflicts if exams are sometimes scheduled on weekends when they are in training, for example, or if papers come due while they are away on assignments.

The Serving Scholars proposal may allow these student-reservists to defer or write exams early if needed or renegotiate due dates for assignments and papers. As well, they may be able to register for courses early if they are busy during the summer with military duties.

The proposed initiative received coverage from Guelph Today as well as Academica.

Alex Fekri, a fifth-year accounting co-op student, has been in the reserves for four years. Although he’s learned to plan his schedule well ahead to account for his academic and military responsibilities, he sometimes runs into challenges.

“Many of our professors’ deadlines are on Sunday nights, but as reservists we often work on weekends, typically in the field far from a desk, so meeting those deadlines can be difficult,” he said. “Other times, we are called to emergency operations far from home with little notice, such as during the recent spring flooding in the Ottawa area. This will mean being able to have a bit of flexibility with deadlines or exam dates.”

John Walsh, a classics professor in the School of Languages and Literature who helped to spearhead the initiative, said provisions in the Serving Scholars proposal resemble those offered to varsity athletes, who often need to reschedule exams or assignment deadlines when they know they will be away at events.

Few students in military service will need to use these proposed provisions, he added, but having them in place would be helpful if issues arise.

“We want military members to feel assured that their two roles of students and soldiers will not come into conflict with one another,” said Walsh. “We don’t want them worrying about exams while they are in active duty in potentially dangerous situations.”

The University worked with the local Army regiment (the 11th Field Regiment of the Royal Canadian Artillery) and with affected students to develop provisions that will help them balance their military and academic duties.

“We are very appreciative of this unique and valuable initiative offered by the University of Guelph to Army reserve soldiers, and particularly to the 11th Field Artillery Regiment here in the city,” said lieutenant-colonel Gary McQueen, commanding officer of the regiment.

“Reserve soldiers depend greatly upon educational institutions and employers to support their service so that they can remain ready to respond to emergencies in Canada and abroad.”

Fekri hopes it will also help raise awareness among students about the reserves.

“Many students don’t realize that it is possible to be in university full-time as well as in the reserves. Most of us commit one evening a week and one weekend a month, which is really not a lot.

“I always say that being a reservist is the perfect job for a student: you have the opportunity to be paid while in school, and over the summer you get help with your tuition fees and you can do something adventurous while helping others.”