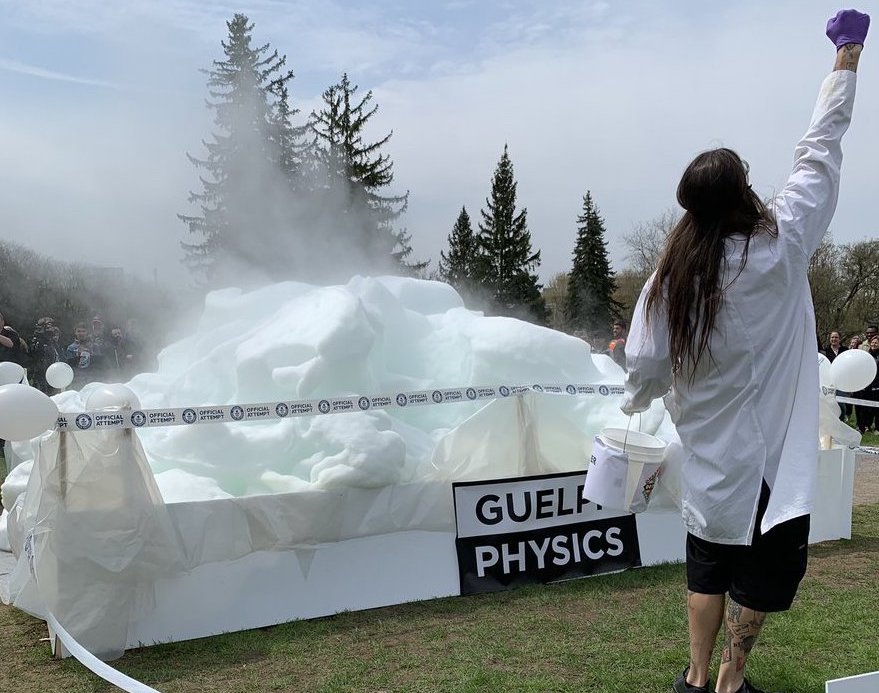 The University of Guelph’s Physics and Astronomy Club has set a new Guinness World Record for the largest-ever creation of “elephant toothpaste.”

The Guinness World Records team has confirmed that the frothy explosion of chemicals created by the club on Johnston Green this past May was the largest ever.

At 21.04 cubic metres (755 cubic feet), the steamy pile of soap bubble foam was almost double the size of the previous record of 13 cubic metres.

Jason “Orbax” Thomas, science communication officer for U of G’s Department of Physics who helped spearhead the event, says he and his team are “elated” their record attempt went so well and was accepted by the Guinness World Records team.

“We’re pretty excited that it worked. We had done a test run with a smaller version of the recipe that was about 1/500th of the size, so to watch it blow up in real time on the field was fantastic,” he said.

The record attempt took place as part of the Guelph Science Olympics on campus, which attracts more than 1,000 area high school students to showcase their science projects and learn about careers and higher education in science.

Orbax and his team wanted to showcase the club by replicating one of the classic introductory science experiments – elephant toothpaste – in giant form.

But instead of using the usual recipe of dish soap, baking yeast and 3-per-cent hydrogen peroxide, they went with a bigger, more powerful combination of dish soap, 30-per-cent peroxide and potassium iodide donated by Fisher Scientific Canada.

The explosion of foam took only seconds to create and was captured by cameras from local TV stations and newspapers, along with dozens of spectator cellphones and a Department of Geography drone hovering overhead.

Orbax, who does external outreach for the department, led the event along with assistant “Sweet Pepper” Klopek. Using the drone’s camera and some mathematical modelling help from the Department of Mathematics and Statistics, they collected all the measurements and sent the data to the Guinness World Records team. That team declared the new record.

Orbax said he’s glad he could help set another record on the U of G campus and maybe inspire a few more people to think about a life in science.

“We always want to inspire young people and to show them that science can be fun, because getting people excited enough to look into careers in science is what it is all about.”