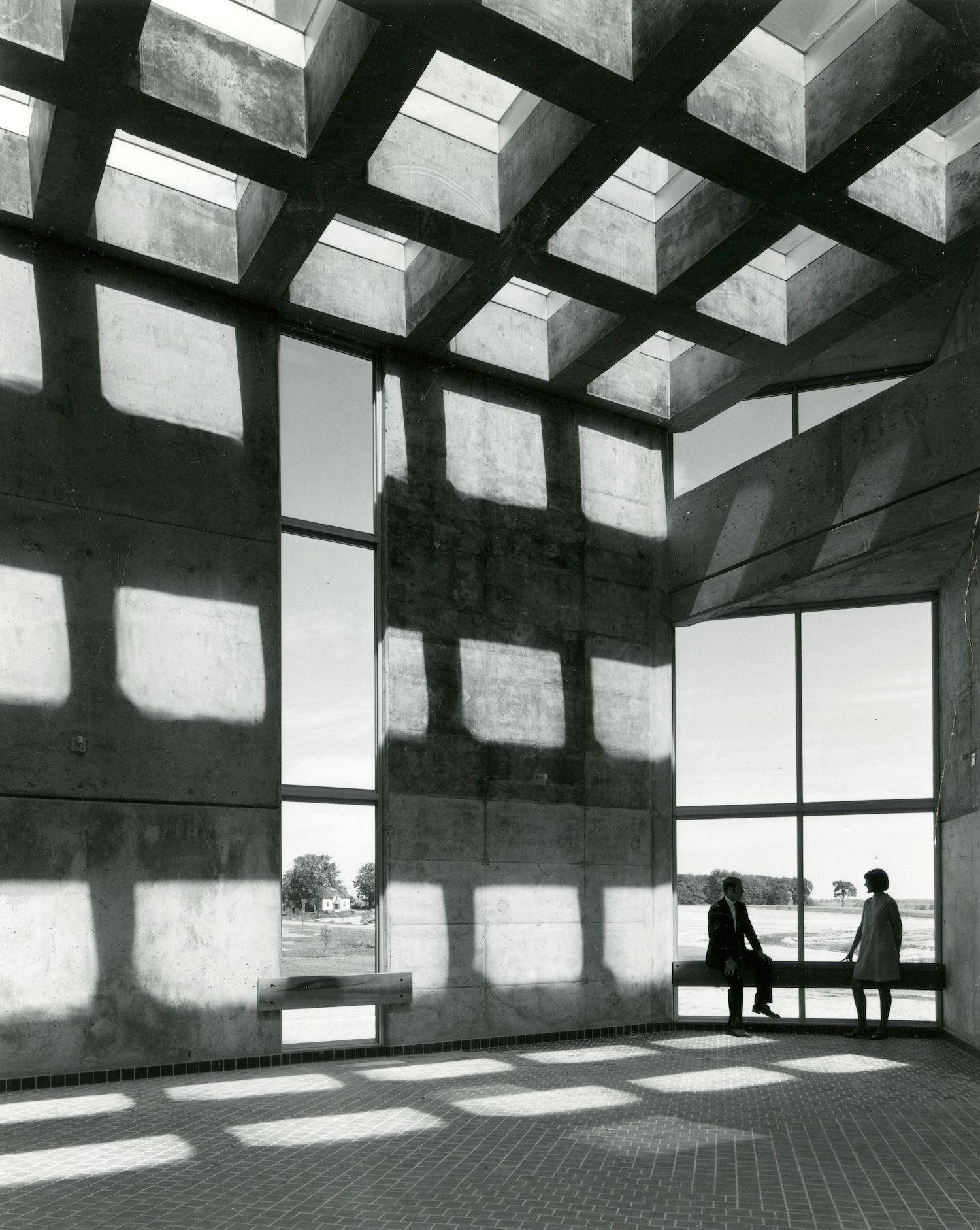 There’s beauty in concrete? Ask Wilfred Ferwerda, co-curator of a new University of Guelph Library exhibit about the concrete building boom of the late 1960s that reshaped the look and feel of a then-fledgling campus and that continues to define today’s U of G.

“Brutalism at Guelph: Concrete in a new light” opens June 21 in the McLaughlin Library archives and runs until December.

The display contains photos, articles, illustrations and commentary about a handful of campus buildings erected mostly between 1966 and 1969 — Lambton Hall, South Residence, the MacKinnon and MacNaughton buildings, and the library itself.

The exhibit was assembled from material in the library’s archival and special collections by art history and landscape architecture students in a fourth-year experiential learning course. The course was taught this past winter by exhibit co-curator Sally Hickson, director of the School of Fine Art and Music.

Many of those projects borrowed the Brutalist ethic, a term that came into use in the 1950s to describe the concrete architecture emerging in Europe, including Le Corbusier’s béton brut (“raw concrete”).

That material allowed architects and builders to make a “bold and unapologetic” statement, said Ferwerda. That kind of statement was especially important after U of G was established in 1964. The campus master plan drafted that year called for ambitious changes and additions to accommodate a rapidly growing student population.

University administrators of the day “had a vision for the University that was national and international in scope and ambition,” said Ferwerda. “The architecture was meant to express that. It was expressive of a new age.”

Looking to dramatically increase enrolment, U of G recruited Canadian and international designers, including Josep Luis Sert (then head of the Harvard School of Design), Macklin Hancock, John Andrews and Eberhard Zeidler to create new buildings.

Working from the campus master plan, they completed five concrete buildings in three years – along with construction of roads and other infrastructure – to turn a rural college setting into an urban university campus.

Unlike other university campuses of the day, said Ferwerda, U of G’s Brutalist buildings were intended to fit into and enhance the existing campus framework. He points to MacKinnon, whose north-wing elevation – unlike its south-end tower – responds to the elevation of the traditional four-storey residence building next door. 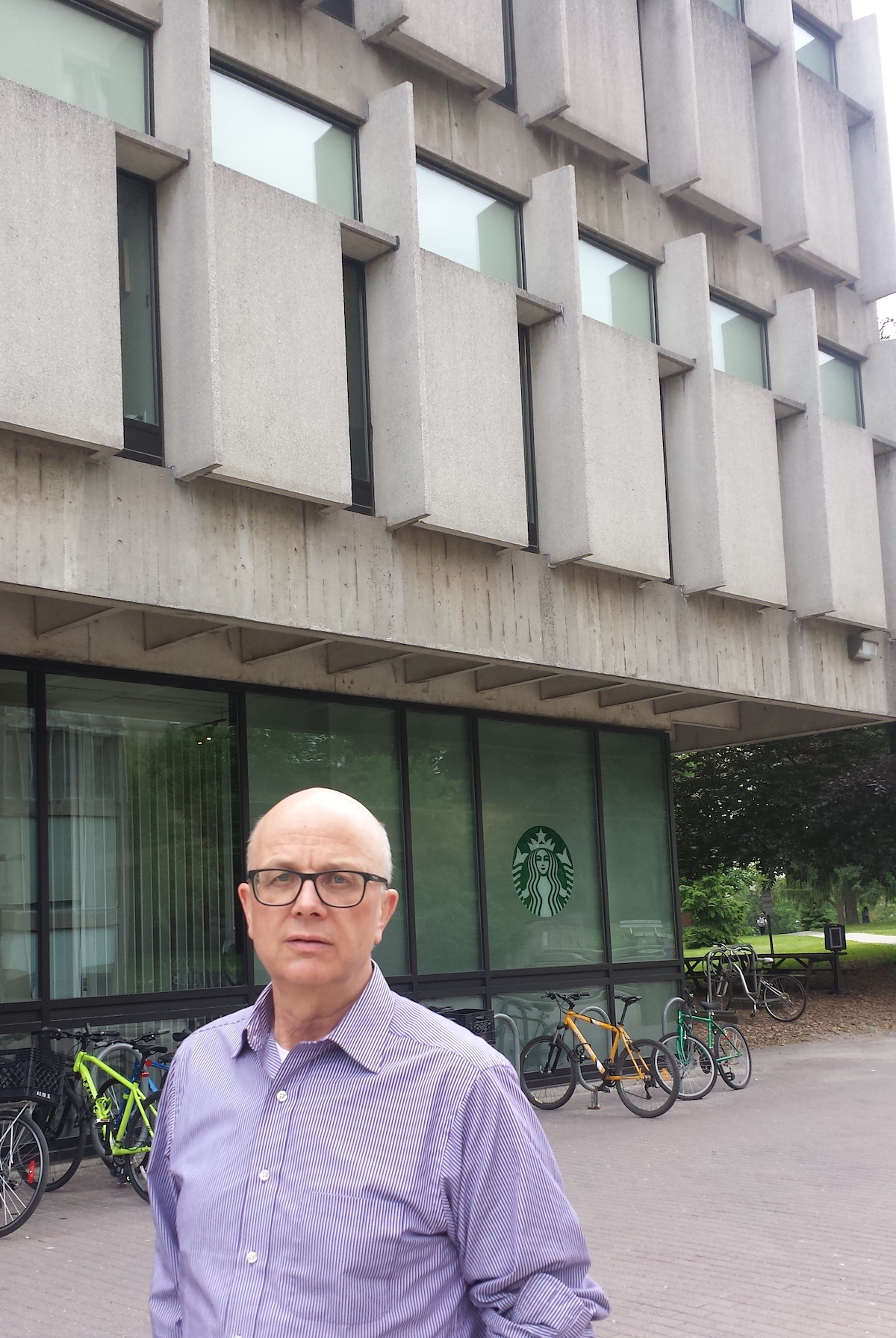 Wilfred Ferwerda, co-curator of the exhibit

Referring to a “dialogue” between concrete and stone across the intervening walkway, he said, “There’s a nice interplay between Johnston Hall and the MacKinnon Building. That’s a really nice space.”

He proposed the new exhibit after touring the archives during a library renovation in 2018.

The display covers the original campus master plan and various amendments as the building boom unfolded through the late 1960s and into the early 1970s (the University Centre was completed in 1974).

One image shows MacKinnon rising alongside the former campus beef barns on Trent Lane. Interior photos of McLaughlin and MacKinnon show how designers carried that Brutalist aesthetic inside with modular furnishings and lounge spaces.

Pointing to photos of what he calls “the most maligned concrete building on campus,” Ferwerda said South Residence was rumoured to have been designed by a penitentiary architect. It was designed by John Andrews, also the architect for Toronto’s CN Tower and Scarborough College of the University of Toronto.

The nearly 700,000-square-foot residence was considered state-of-the-art when it opened in 1968; it remains one of the largest student residence complexes in Canada. Ferwerda said its modular construction with alcoves and an attempt to mimic streets and houses was intended to promote social interactions among students.

And, yes, he said, concrete can be beautiful. The exhibit’s signature photo, taken from inside South Residence before the addition of the Eccles Centre, depicts a checkerboard of light and shadow on an interior wall cast by the ceiling latticework of concrete and glass. “That photo is awesome because of its light and space.”

Fifty years later, Brutalism has become “the architecture of the recent past,” he said.

Referring to a model of the MacKinnon Building, he points out a planned renovation to existing performing arts spaces and construction of a lab for the International Institute for Critical Studies in Improvisation.

“The designers are working to preserve the building’s Brutalist heritage while adapting it to accommodate the present and future needs of the University’s student population.”