For the next month, Guelph Civic Museum is hosting an exhibition curated by a collective of Indigenous women from U of G. 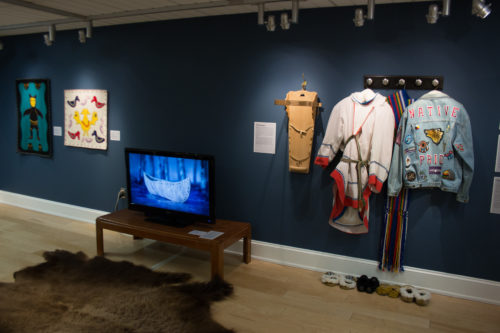 Konnón:kwe is a word that signifies three or more women in the Kanyen’kéha (Mohawk) language.

“Although many Guelph streets have been renamed after British cities like Birmingham and York, there remains an undeniable Indigenous presence in Guelph and the surrounding area,” says Luby. “Konnón:kwe draws viewers’ attention to some of the Anishinaabe, Haudenosaunee, Inuit and Métis women who have maintained the territory – and their families – in the face of settler colonization.”

The exhibition is meant to engage visitors in conversation about how Indigenous women have resisted the effects of colonization and what is possible when women come together to build healthier communities for their children and grandchildren.

“There was something about the energy in the space when all was said and done,” says Brant. “We came together and sat at the kitchen table and there was an overwhelming feeling of positivity, wonder, warmth and empowerment. It truly was a collective effort.”

The exhibition is part of the Guelph Civic Museum’s spring collection and is on display until May 19.