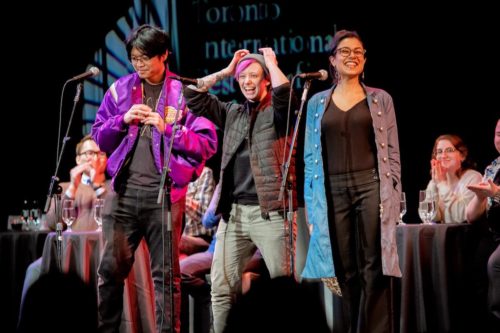 A childhood story about two siblings who get stuck while time travelling, improvised by a team of three University of Guelph creative writing students, has won this year’s Toronto International Festival of Authors’ Lit Jam.

The interactive storytelling competition involves prompts from audience members that spark the imaginations of team members. Among the post-secondary creative writing programs competing in Lit Jam this year were York University and University of Toronto Scarborough.

The U of G team, made up of creative writing MFA students Miquel Gamboa, Kai Taddei and Preeti Dhaliwal, took home the $750 first-place prize. The team’s story was prompted by the line: “’It doesn’t just tell time,’ he explained, ‘it tells history.’”

The transcription of the story is printed on the NOW website.