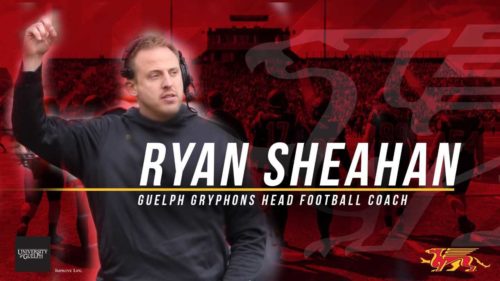 The University of Guelph’s Department of Athletics has named Ryan Sheahan as head coach of the Guelph Gryphons football program.

Sheahan joins U of G after four seasons at the University of Calgary, where he was the Dinos assistant head coach and offensive coordinator.

“I am tremendously excited for the opportunity to work with the talented staff and student-athletes here at Guelph,” said Sheahan, who becomes the 17th head coach in program history. “I cannot thank the people in Calgary enough for four excellent seasons there.”

At Calgary, Sheahan consistently developed some of the most prolific offensive lines in Canadian university sport, said Scott McRoberts, director of athletics at U of G.

“Statistically and technically, there’s no question that Ryan is one of the brightest young minds in the country. But what excites us the most about bringing him on board is the outstanding leadership qualities he possesses,” said McRoberts. “Ryan’s focus on developing excellence both on the field as well as within the classroom and community will help shape the University of Guelph’s football program as a long-term contender at the national level. We would also like to thank Todd Galloway for the incredible work he did this past season in leading our team to a Yates Cup appearance.”

Galloway, who served as interim head coach for the Gryphons during the 2018 season, will remain on staff as director of recruiting for Gryphon football.

Sheahan said, “After speaking with the administration here, I knew that the University of Guelph was a perfect fit. From a head coach perspective, the program is already doing a lot of great things. My job is to try to build on the strengths of the program that are already in place, while also addressing some of the areas in which we can improve.”

Referring to Ontario University Athletics, he said, “The OUA is a very competitive conference, but our goal is to build a sustainable model where we can compete for Vanier Cups year-in, year-out.”