Hear voices from the past come alive this summer on U of G’s CFRU 93.3 FM. Students from Prof. Catharine Wilson’s graduate rural history class share half-hour episodes that pull from fascinating Canadian diaries. Each of the six shows features a nineteenth-century diarist from the Rural Diary Archive website.

As a United Empire Loyalist, Hannah Peters Jarvis once had her own servants and slaves. By 1845, she has fallen on hard times and looks after her grandchildren in a decaying mansion home. A sense of foreboding prevails as she struggles with her identity near the end of her life. 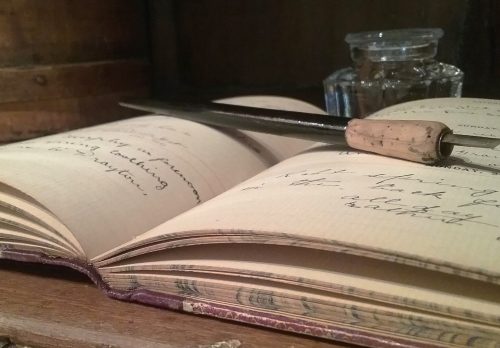 William Porte’s diary provides a settler-Gothic story. Porte writes in the late 1870s about escalating cases of arson in the community. He is postmaster for the village where the infamous Donnelly family are murdered in their beds in 1880. In the months and years that follow, he shares his unsettling sense that justice hasn’t been done.

Garrison Shadd is the son of Abraham Doras Shadd, the famed abolitionist and conductor of the Underground Railway, and brother of Mary Ann Shadd, the first black woman in North America to publish a newspaper. Garrison and his sons share how they built a community and became successful farmers. Their 1885 diary is an inspiring narrative that explores self-governance and racial determinism.

“This has been a learning experience for all of us,” says Wilson. “Writing for the radio is different than writing a term paper. Radio is a very intimate medium and one must work with the listener in mind and appeal to their ears.”

Using the same principles as radio storytellers from generations ago, Wilson’s students use this unique experiential learning opportunity to bring history to life. Shows are produced in collaboration with CFRU’s Chris Currie. The Rural Diary Archive is sponsored by the Francis and Ruth Redelmeier Professorship in Rural History and supported by U of G’s McLaughlin Library.