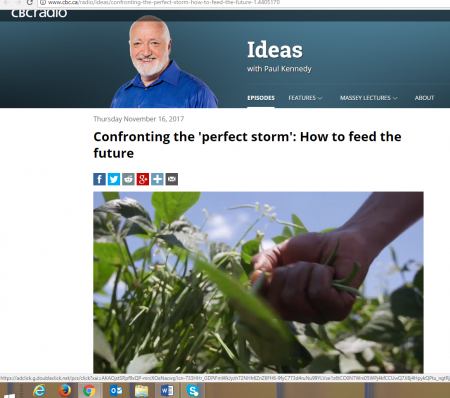 CBC Radio’s Ideas With Paul Kennedy rebroadcast a two-part series on the future of food featuring Prof. Evan Fraser, director of the Arrell Food Institute at U of G.

“Confronting the ‘perfect storm’: How to feed the future” aired April 13 and “The hidden power of food: Finding value in what we eat” April 20.

The series was recorded during a panel discussion at the Canada 150 Symposium: Reflect and Envision held at U of G in October 2017 and sponsored by the Arrell Food Institute.

“Within the area of global food security, there is a huge amount of complexity,” said Prof. Evan Fraser. “I’m hoping people come away [from this conversation] with a sense of the complexity, but not that it’s so complex that we can’t make progress.”

“Global challenges don’t get bigger or more exciting than global food security,” Fraser said. “It’s a challenge but also a huge socio-economic opportunity. We have the ability to radically rethink the way we produce, distribute and eat food.”

He added: “Canada has a really exciting opportunity presenting itself. I share the visions articulated by the federal government—that Canada can be the world’s supplier of safe and nutritious food.”