Two students received the Lincoln Alexander Chancellor’s Scholarship. The award, named for former longtime chancellor Lincoln Alexander, recognizes top students who have made significant community contributions and who are Aboriginal, a member of a visible minority or a person with a disability.

U of G president Franco Vaccarino and chancellor Martha Billes presented the awards at the Arboretum Centre. 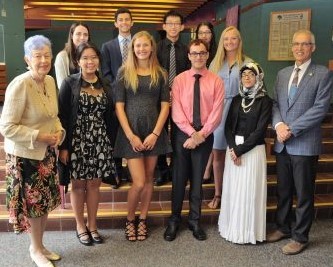 “It is an honour for me to recognize these extraordinary individuals as they start their academic careers at the University of Guelph,” said Vaccarino.

“They are studying in different fields, but share a record of academic achievement, leadership and service to the community. I look forward to seeing the contributions they will make as U of G students.”

The 2017 Chancellor’s and President’s Scholarships are worth $40,000 each over four years and include an opportunity for a summer research assistantship worth an additional $8,000. Recipients are teamed with a faculty mentor in their academic discipline.

The scholarship program has recognized more than 350 students since the first President’s Scholarships were presented in 1987. The awards are funded mostly through donations from alumni, friends, faculty and staff.

This year’s recipients are as follows:

Lauren Chang (arts and science) has run activities for the TOPS (Talented Offerings for Programs in the Sciences) enriched program in math and science for high school students. She won writing competitions in Toronto’s Word on the Street book festival and the CBC Shakespeare Selfie Challenge. Chang has been a peer educator and performer with SeXT (Sex Education by Theatre). Mentor: Ian Newby-Clarke, Psychology

Brooke Davidson (human kinetics) is an elite athlete who rallied team members for breast cancer awareness and fundraising events as well as food bank collections. She played soccer, hockey, basketball and volleyball, and served as a member of her school’s athletic council. Mentor: Prof. Chris Whitfield, Molecular and Cellular Biology

Kiana Gibson (arts and science) is a multi-sport athlete and provincial competitor in track and field and cross-country. Gibson has coached and counselled youngsters in gymnastics and at an athletic camp. She helped lead school groups, including serving as co-leader of Tools With Impact, which raises funds for education in Ecuador and Mali. Mentor: Sherilee Harper, Population Medicine

Karling Luciani (neuroscience) was a student trustee in her school board and head of her high school student council. She took part in school and community fundraisers, and has been an advocate for mental health awareness. Luciani won the 2016 Welland Youth Citizen of the Year award. Mentor: Mark Fenske, Psychology

David Sahai (bio-medical sciences) was a member of school student council and the athletics association. A competitive volleyball player and a musician, he has also been a hospital volunteer. Mentor: Teresa Crease, Integrative Biology